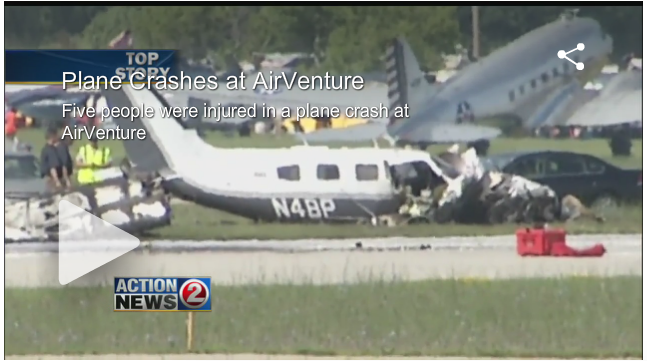 All runways at EAA AirVenture grounds in Oshkosh, Wis., are open after a plane made a hard landing and caught fire Wedesday morning, closing the airport for almost three hours.

Five people were aboard the plane at the time of the crash and all were transported to local hospitals after the Piper Malibu plane came in for a rough landing on Runway 27 at Wittman Regional Airport at 7:45 a.m.

Dick Knapinski, Director of Communications for EAA AirVenture, says the pilot of the plane was 46-year-old Kenneth J. Kaminski of Benton Harbor, Mich. The other people aboard the plane were identified as: 71-year-old Gerald T. Kaminski, 30-year-old Margaret C. Laing, and 26-year-old Nathan P. Gargano and 56-year-old Neil F. Dill.

A firefighter who responded to the crash was also transported to the hospital and was released after being treated for heat exhaustion.

For the complete story by Rhonda Roberts of WBAY-TV, click here.