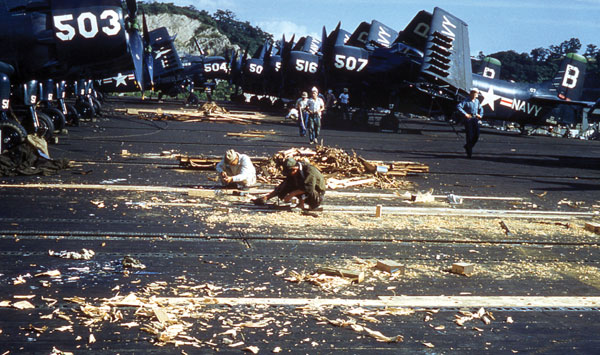 The reason why the earlier U.S. aircraft carriers had flight decks covered with wood as opposed to steel has been a mystery to many. Most will tell you that all of the decks were with teakwood. This may have been the preferred material, but beginning in 1941, most of the world’s teakwood was found in areas that were controlled by the Japanese. The most widely used wood was Douglas fir, which had the right amount of give for landing aircraft and a very low splinter factor. Keep in mind the amount of wear and tear that these surfaces absorbed from landing aircraft’s hooks slamming down and the arresting cables skidding back and forth hundreds of times per day in combat situations.

According to the supervisor of USN ship building for straight deck carriers, Douglas fir was preferred for the flight deck and Oregon pine for the margin planks. This pertained to Essex class carriers initially from March 1944 through summer of 1945. These specifications called for 3-inch thick Douglas fir and Oregon pine for the port deck edge elevator deck only. The two inboard elevators called for 3/4-inch Special Treatment Steel (STS) plating while the flight decks used 3-1/2-inch armor steel plating underneath the layer of wood. As a result of the kamikaze attacks during the Okinawa campaign, new carriers being built would have thick metal-armored flight decks beginning with the Midway class carriers.

A Navy pilot who flew combat in two wars stated that during World War II, the aircraft were always parked at the rear of a carrier deck because prop types usually used full-power deck runs to take off and cat shots were rare. However, on landing, some of the aircraft hit the deck hard, collapsing the gear and the props chewed up the wood decks. On occasion, the prop blades would cut through the wood and penetrate down in the ready room, which caused these areas to be evacuated during aircraft recovery. Thick steel plates helped this situation.

American carriers in World War II and Korea used wood due to its ease of repairability. If a section was torn up by an accident or crash, the crew pulled up the damaged or burnt wood and replaced it quickly with whatever was available. Most sailors preferred wood, not only for its payload, but the hot humid conditions in the Pacific would have made life miserable for anyone on the deck or the hangar deck due to the excessive heat that would have been generated if the decks were made of steel plating. Another major factor in favor of wood was during a fast refueling process, fuel spilled out over the deck. With tons of ordnance and ammunition also present, if a maintenance crewman happened to drop a wrench on a steel deck, causing a spark would have led to a major disaster.