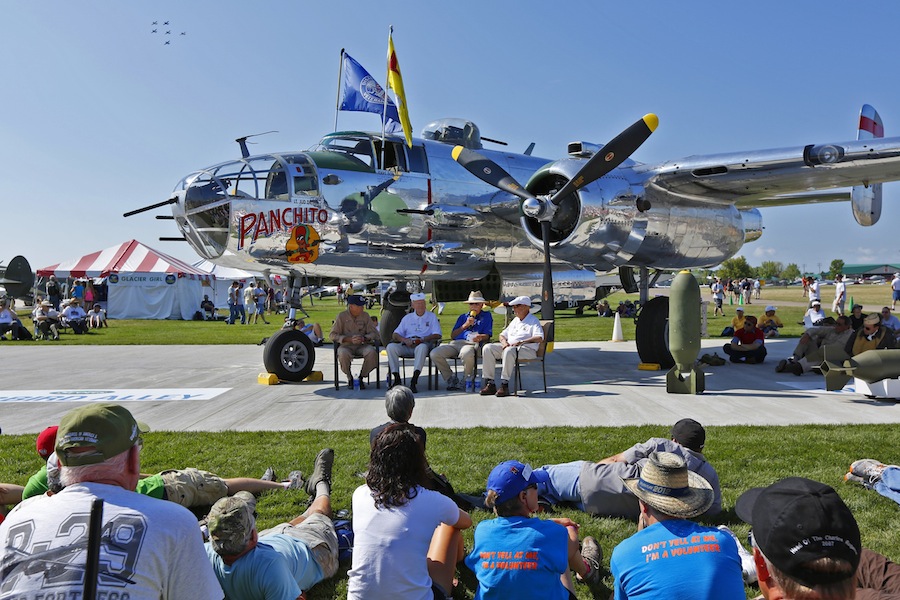 History buffs will be ecstatic – aviation enthusiasts will be thrilled – the general public will be captivated.  Those are the great reactions to be expected when five lovingly restored, airworthy B-25 Mitchell bombers visit the Destin Airport in conjunction with the activities for the 71st Doolittle Raiders Anniversary Reunion in Fort Walton Beach.

There are only about 32 of these great birds still flying in the world – out of a production run of nearly 10,000 manufactured between 1940 and 1945.  General Jimmy Doolittle and his Raiders used these planes for their famous Tokyo Raid in April of 1942, which is considered by historians to be a real turning point for American morale during the Second World War.

The planes will be displayed at the Destin Airport from Wednesday, April 17 through Sunday, April 21, and will be available for flights for the general public.  The cost is $425 to experience the thrill of flying in the very same type of plane that helped the Allies win the war. No advance reservations are needed. There will be rides coordinators at the small white tents near the B-25’s.

They will also participate in “Thirty Seconds Over the Emerald Coast,” a flyby on Friday, April 19, at 6 pm.  The B-25s and other historic aircraft will fly over the beaches of Okaloosa Island.  This is a once-in-a-lifetime opportunity to see these historic planes over the very same sands where they flew during the Raiders’ training at Eglin Field in March of 1942.  The prime viewing location for this event will be the Boardwalk on Okaloosa Island, where many of the restaurants and shops will be offering specials.

The planes will also fly in formation over the “Parade of Heroes” on Saturday, April 20, at 11:00 am.  This community salute to the military is the first of its kind in our area.  It will feature veterans and active duty personnel from World War II and subsequent conflicts, with the Doolittle Raiders as grand marshals.  They will be followed by their WWII comrades, and veterans from the Korean Conflict, the Vietnam War, the Gulf Wars, and active duty personnel.  The community is invited to participate in this grand celebration of our military heritage.  Beach Community Bank will distribute American flags to all the parade spectators.  Contact the FWB Chamber at 850.244.8191 for more information.

The five planes in attendance at the Reunion will be: Panchito (Georgetown, DE), Killer B (Douglas, GA), Yellow Rose (San Marcos, TX); Georgie’s Gal (Port Clinton, OH); and Special Delivery (Galveston, TX), the only one to carry the famous Doolittle Raiders crest.

“This may be the last large gathering of B-25s in one place because this is the final public Raiders reunion,” said Larry Kelley, from the Delaware Aviation Museum and Panchito pilot. “It’s very expensive to fly them from one location to another, and this may be the last time the public will be able to see more than one or two in the same place.”

The planes will be on display at the Destin Airport with the following schedule:

No advance  reservations are necessary- arrangements may be made with the rides coordinators in the small tents set up where the B-25’s are parked at the airport.

The visit of the B-25s is sponsored by the Emerald Coast Tourism Development Department, Cox, and Northwest Florida Regional Airport.  Beach Community Bank is the presenting sponsor of the 71st Doolittle Raiders Anniversary Reunion – “The Final Tribute,” and reunion events are organized by the Greater Fort Walton Beach Chamber of Commerce, with the support of ResortQuest, Image Printing and Digital Services, Lockheed Martin, and the Northwest Florida Daily News.