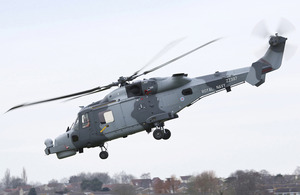 The first AgustaWestland Wildcat HMA Mark 2 maritime attack helicopter to be delivered to the Royal Navy has successfully taken its first flight at Yeovil in Somerset, England. The Wildcat has a more powerful engine, allowing it to be flown in extreme conditions all year round. It is also equipped with a more robust fuselage, a high-tech interactive display and a new radar system that provides 360-degree surveillance.

The helicopter  will carry Sting Ray torpedoes, a door-mounted, 0.5-inch heavy machine gun and new light and heavy variants of the future anti-surface guided weapon missiles. Expected to perform a range of tasks once in service, the maritime Wildcat attack helicopter will be used in anti-surface warfare, force protection and counter-piracy. It also will be able to carry out an anti-submarine role.

“As a ship-borne helicopter, Wildcat will provide commanders with a flexible attack capability which can be deployed to tackle a range of threats at sea and from the sea,” said RN Chief of the Naval Staff, Admiral Sir Mark Stanhope. “With state-of-the-art sensors, equipment and weapons, it will be an outstanding asset that will maintain Royal Naval units at the cutting-edge of worldwide maritime operations.”

The U.K.’s Ministry of Defense signed a contract worth almost $400 million with AgustaWestland last year to provide support and training for the Royal Navy and British Army’s 62-strong fleet of Wildcat helicopters. The Royal Navy will receive 28 maritime attack variant helicopters, which will begin operations across the globe from 2015 and replace the existing Westland Lynx Mark 8.

From a Gov.UK news release