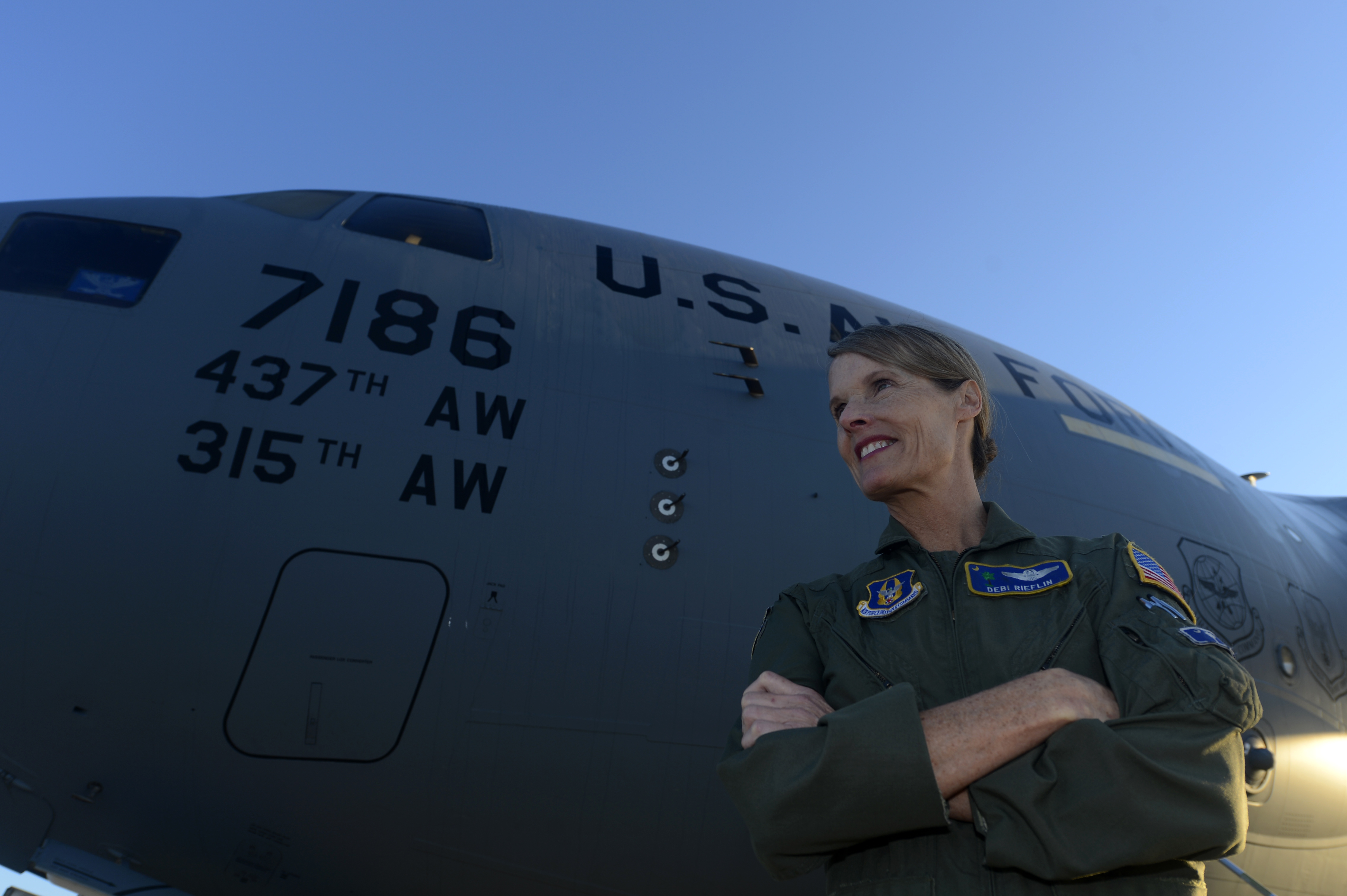 Just over two decades ago, a new chapter in aviation history was written on Charleston soil as the first Boeing C-17 Globemaster III made its official debut in the Air Force’s premier aeronautical inventory in June, 1993. Ushering in this solid airframe was an initial cadre of elite Charleston Air Base members involved in its concurrent testing, evaluation and implementation.

Fast forward 21 years, and Lt. Col. Debi Rieflin, former 315th Operations Support Squadron training chief, marked the end of an era during a combined fini-flight and retirement ceremony Oct. 27, 2014 as both an initial cadre member and the first operational female aircraft commander for the C-17.

Rieflin’s military career writes the story of a true pioneer for women in the aviation community–one that began in 1983 after graduating from Cornell University in Ithaca, N.Y. There she earned both her Bachelors of Science in Mechanical Engineering, as well as her Air Force commission.

Rieflin, who had initially desired a career in engineering, took a risk and decided to follow a career path similar to her father’s, who was a commercial pilot and instructor.

“My parents raised me to believe that I could do anything I wanted to do. While my father didn’t specifically steer me toward this career, when given the opportunity, he encouraged me to give it a shot because he thought I’d enjoy it and be good at it,” she said.

Upon graduating and commissioning, Rieflin faced her first hurdle. For that specific year, the Air Force had 1,000 pilot slots, but only 25 were allotted for women. Additionally, in 1983, only 15 of the Air Force’s 37 aircraft at the time were considered non-combat – so they were the only ones women were eligible to fly.

“There were plenty of skeptics out there, doubting that women should fly, let alone whether they could or not,” said Rieflin.

However, despite the odds, she was selected for training and began her 31-year journey in aviation.

The road ahead wouldn’t always be easy, but Rieflin wasn’t a stranger to being the minority. The percentage of female engineers, pilots and military members alone was small, but these challenges didn’t faze her.

“I encountered biases along the way, but refused to let them prove true,” she said.
In fact, the challenges only motivated her to prove the biases wrong.

“By demonstrating professionalism, competence and excellence, it’s hard for anyone to deny that you belong,” said Rieflin.

Despite some of the limitations in front of her, Rieflin said that patience in this career-field also served her well, by waiting for Congress to incrementally allow women to perform additional duties.

Following pilot training, Rieflin went on to hold many leadership roles, both active-duty and reserve, to include maintenance officer, command post duty officer and C-141 instructor pilot for the 300th Airlift Squadron, all by 1993. From there, she assumed the inaugural position as the first female operational aircraft commander for the C-17 during her time at Charleston Air Force Base, S.C. — an airframe she would fly until retirement.

The feeling of knowing she was the first, was one that filled her with a great sense of pride. “Being part of the elite group of professional aviators was indeed an honor,” she said.

Becoming a cargo pilot provided Rieflin many unique opportunities to see the world, to include a vice presidential support mission to Egypt, where the crew was able to see Tut’s tomb, tour the pyramids, the Valley of the Kings and ride down the Nile River.

One particular mission that she’ll never forget, and one she still considers as her most significant, was bringing home a fallen hero from Afghanistan to be laid to rest.

Now, at a new stage in life, with four grown children, and a transition into the commercial flying world with Delta Air Lines, Rieflin has left a legacy that demonstrates the delicate balance between family and career.

“I feel fortunate to have achieved and maintained a great family and career balance over these 31 years and going forward…I feel like I “have it all”. I hope to have shown this through my family, career, and by being a concerned citizen and aviation professional, dedicated to ensuring safe and smart operations in order to take care of the people who give so selflessly to our nation’s defense of freedom as well as the families who support them,” she said.

Rieflin credits a long list of fellow comrades who she considered mentors, shaping her both professionally and personally. In more recent years, Rieflin said she has the likes of retired Col. Steve Lesniewski, Lt. Col. Russ Catanach and Col. Caroline Evernham to thank for encouraging her development and backing her efforts.

“She has always impressed me with her thoroughness and professionalism in the cockpit. But what really struck me was her phenomenal skill in air refueling. She’s as smooth and stable as they come, and I think every one of her contemporaries will attest to that,” said Catanach, 315th Operations Group deputy commander.

Her impact to the C-17 community has been and continues to be far reaching. In fact, her passion for safe and proficient flying led to her developing multiple programs and tools which aid supervisors in tracking training currency and consequences for non-currency, as well as procedures for addressing aircrew fatigue.

“She did a ton of research into the topic of aircrew fatigue, and developed a set of indicators and mitigating procedures and forwarded all this info to the [Tactical Air Command Center] and recommended it for inclusion in planning global airlift missions. TACC came to adopt much of what she proposed, and today aircrew fatigue mitigating procedures are an integral part of mission planning, enhancing the safety of the Air Force’s global operations tremendously,” said Catanach.

Cementing her lasting footprint in aviation, Rieflin planned an all-female fini-flight (final flight), followed later in the day by a combined flight and retirement ceremony where she enjoyed her final hours in the C-17 with her most cherished stick mates.

“I never had the chance to be part of an all-female crew during my career to-date, and I wanted to share the experience just once with the women I am so proud to be associated with,” she said.

As a woman brought up to believe she could do anything she put her mind to, she leaves this advice to those facing careers and dreams where they are against the odds.

“Be willing to take risks; try new things. Believe in yourself and work hard. Consider the skeptics ‘in need of enlightenment,’ then show them what you can do!”