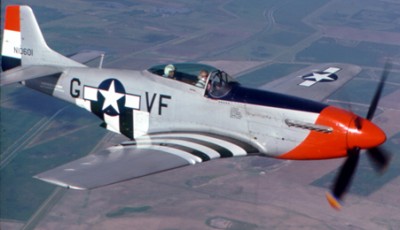 Another World War II warbird will be joining “Maid in the Shade” for the Light Sport Aircraft Expo in Mt. Vernon, Ill. — “Red Nose.”

“Red Nose” is the plane that launched the Confederate Air Force, now known as the Commemorative Air Force. Lloyd P. Nolen, one of the founding members of the organization, purchased the warbird on Oct. 17, 1957, for $2,500. Later that year, someone painted “Confederate Air Force” on its tail — the official start of the Commemorative Air Force. The aircraft was officially donated to the CAF in 1977 and was restored in 1993. It was assigned to the CAF Dixie Wing in November 2002, and took to the air for the first time in four years in September 2003.

For the complete story by Tesa Glass of The (Mt. Vernon) Register-News, click here.