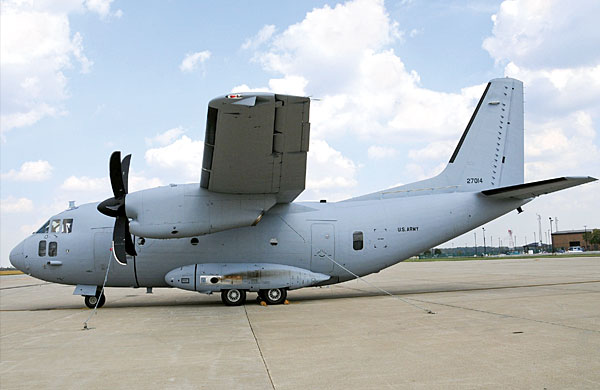 The Italian-built C-27J has been called a “Mini C-130” because it houses two engines (instead of four), and its propellers are identical to those of second-generation Hercules transports. Mansfield’s first aircraft (no. 08-27014) will be the first of four assigned to the 179th Airlift Wing of the Ohio Air National Guard (ANG), commanded by Col. Gary A. McCue, and it’s among 38 the Pentagon will acquire all together. Other C-27Js are at a training facility that’s run by L-3 Communications
in Warner Robins, Georgia. All are painted with U.S. Army markings—vestiges of a defunct plan to have the Army operate the planes. Although the program has had its share of delays, McCue says his troops, who “have PhDs in airlifting,” will be able to deploy to Afghanistan in the spring.

Mansfield is competing with the ANG base at Key Field, Meridian, Mississippi, to become the formal training unit (FTU) that initially trains C-27J pilots, loadmasters and maintainers. Once an FTU is announced, the Warner Robins school will be shut down.

Mansfield held a ceremony to mark its conversion to the C-27J from the first-generation C-130H2.5 Hercules. There were speeches and celebrations, and McCue’s then-fiancée (now wife) Molly Hockenberry christened C-27J no. 08-27011 as the Spirit of Mansfield. A prominent signboard proclaimed the aircraft a new resident of Ohio—but it wasn’t. The wing’s last outgoing C-130H2.5 Hercules flew away at the end of the day, as did the 08-27011, never to return. The wing did not actually have a C-27J in residence until a different airframe arrived a month later. The ANG is preparing to operate six C-27J wings, each with four aircraft (six in the FTU).— Robert F. Dorr