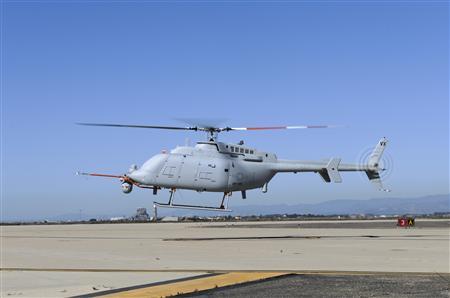 A larger and more powerful version of Northrop Grumman’s Fire Scout unmanned helicopter made its first two flights on Thursday, the U.S. Navy said as it plans to start using the new aircraft next year.

The MQ-8C Fire Scout took off and flew for 7 minutes in its first flight at Naval Base Ventura County in Point Mugu, Calif., the Navy and Northrop said in news releases. It reached an altitude of 500 feet and flew 9 minutes during a second flight. Northrop said it had developed the new Fire Scout in just one year, much faster than normally seen in U.S. weapons programs.

“It is a big accomplishment for the integrated government and industry team to fly this air vehicle for the first time,” Captain Patrick Smith, the Navy’s Fire Scout program manager, said in a release issued by the Navy.

For the complete story by Andrea Shalal-Esa of Reuters, click here.