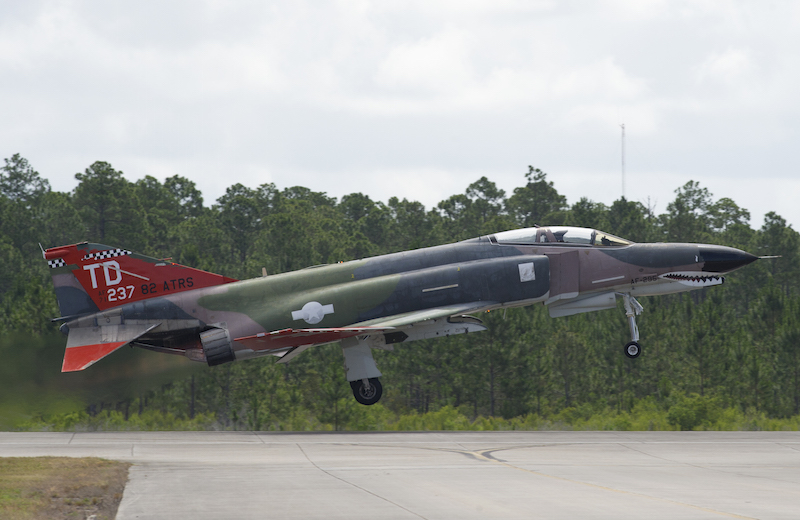 Two QF-4 full-scale aerial targets took off around 10:15 a.m. and were successfully destroyed about 30 minutes later by pilots completing their mission exactly as it was supposed to go.

“The QF-4 has really served the Air Force and the nation very well by making sure that our weapons are qualified and tested, and we know they’re going to work when our pilots take them into harm’s way,” said Jerry Heikkinen, 82nd ATRS drone remote controller and pilot. “Instead of wasting away in the desert and sitting in long term storage, these aircraft have been modified to provide valid combat effectiveness testing for our military forces, and it’s really a good way for these airplanes to go.”

Tyndall’s QF-4 program initially started in 1997 and the destruction of the last two QF-4s marks its replacement with the QF-16 Falcon.

“I feel very happy about the way things went today,” said Heikkinen. “The QF-4 has been a combat-tested airplane to be used as a target for our weapons testing program. Now we’re going to move on to using the modified QF-16 as our aerial target.”

Like the QF-4, the Lockheed Martin QF-16 is a full-scale aerial target that can be flown manned or unmanned. Unlike the QF-4, the QF-16 has all the capabilities of a newer generation aircraft.

“We get much more maneuverability out of it, and essentially we have a fully capable F-16 Falcon,” said Lt. Col. Matthew Garrison, 82nd ATRS 0perations director. “It can pull 9 G’s, go supersonic and climb up to 55,000 feet just like the front-line fighters. We now have that as a target.”

The full-scale aerial target program could not be accomplished without a team of invaluable maintainers, analysts, engineers, pilots and members that make the testing of the Air Force’s weapons systems possible.

“It is a team effort,” said Heikkinen.

While this is the last QF-4 flight for Tyndall, the QF-4 still flies at Holloman AFB, N.M.