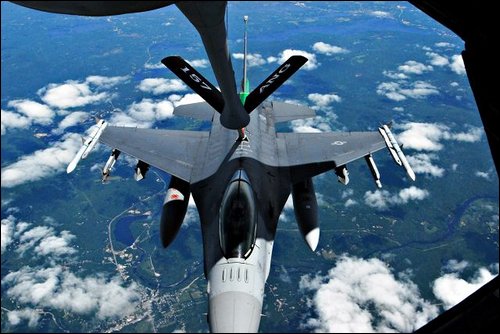 For decades, the thunder of Vermont Air National Guard jets has been a noisy feature of life in the towns around Burlington, Vt., where the commercial airport also houses the U.S. Air Force’s 158th Fighter Wing, known as “The Green Mountain Boys.”

Now, the potential arrival of louder, new Lockheed Martin F-35 Lightning II fighters that will replace the guard’s aging F-16 fleet, also built by Lockheed, is infuriating some residents and has brought growing scrutiny to the process that made the Burlington air base the planes’ likely destination.

The fight has grown steadily since 2010, when the Air Force said the Vermont base was a preferred site for F-35s among Air National Guard bases. A second location, Hill Air Force Base in Utah, was chosen from three active duty sites. In the fall, the Air Force is expected to decide where to base the jets. If Burlington is chosen, up to 24 planes will arrive sometime between 2015 and 2020.

For the complete story by Theo Emery of The New York Times, click here.