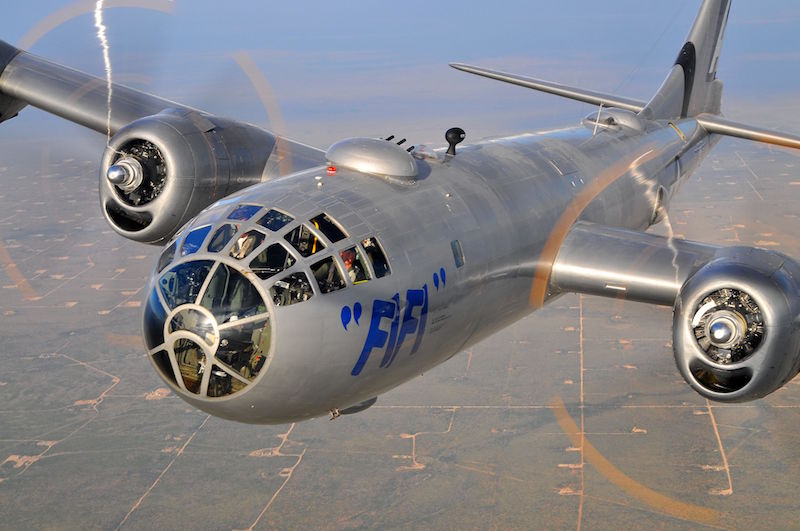 The Commemorative Air Force’s (CAF) iconic Boeing B-29 Superfortress bomber, FIFI, is headed to Florida this spring for a seven-city, six-week tour.

“FIFI” is the only flying B-29 in the world. The B-29 will be accompanied by a variety of other World War II aircraft including the beloved Beechcraft C-45 Expeditor, “Bucket of Bolts;” a North American T-6 Texan; and a PT-13 Stearman. The tour also hopes to include the CAF’s Boeing B-17 Flying Fortress “Texas Raiders” and a Curtiss SB2C Helldiver at some stops; as well as Cavanaugh Flight Museum’s Vought Corsair.

Each year the CAF AirPower History Tour provides powerful “hands-on” history lessons to audiences across the United States by bringing the sights, smells, sounds and stories of World War II aviation to the public at large. Visitors can view the aircraft up close and purchase rides in many of them.

The tour schedule for Florida:

The B-29, first flown in 1942, began active service in 1944 and is best known as the aircraft whose missions over Japan helped bring about the end of World War II. It was designed as a replacement for the older B-17s and B-24s, with longer range and greater bomb loads. The B-29 was also used in the Korean War in the early 1950s and was a staple of the U.S. Air Force until the late 1950s.

For more information and to make advance reservations, click here.