1995 The space shuttle Discovery (STS-63) blasted off with a woman, Air Force Lt. Col. Eileen Collins, in the pilot’s seat for the first time in NASA history. Discovery rendezvoused with the Mir Space Station and Collins would later visit Mir on STS-84 as well. On July 26, 2005, Collins commanded STS-114, the emotional “Return to Flight” following the Columbia disaster. During this mission, Collins became the first shuttle commander to perform a “Rendezvous-Pitch Maneuver”, wherein a shuttle pilot performs a “backflip” near the International Space Station, allowing the ISS crew to photograph the underbelly of the orbiter to check for damage which may have occurred during liftoff. Collins retired from both NASA and the USAF in 2005, citing a desire to spend more time with her husband and two small children. Her daughter, she once said, “thinks all moms fly the space shuttle.” 1964 The Federal Aviation Agency launches Operation Bongo Mark 2 to investigate the effects of supersonic flight; over the coming months, a Convair B-58 will fly through the sound barrier at low altitude over Oklahoma City. 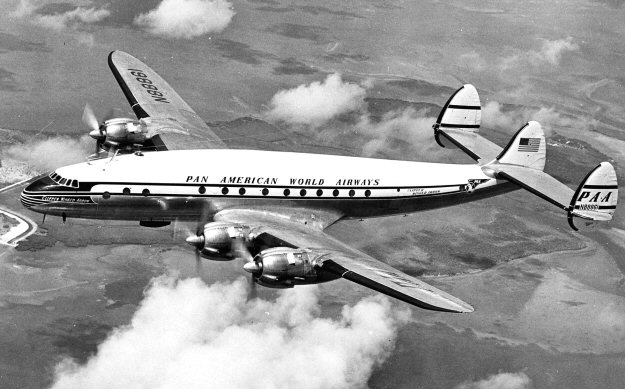 1946 Pan American inaugurates the first commercial use of Lockheed Model 049 Constellation with the aircraft’s first scheduled service between New York and Bermuda. 1934 The first scheduled trans-Atlantic airmail service between Berlin, Germany, and Rio de Janeiro, Brazil, is inaugurated by Luft Hansa. The journey is made in four stages.