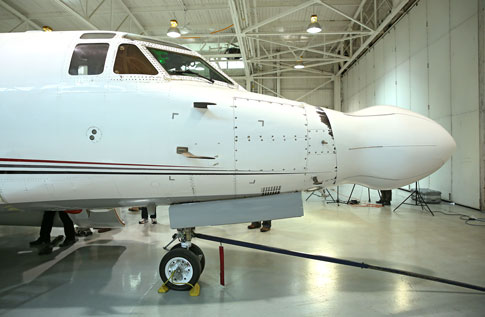 The old gal sat stoically in the Rockwell Collins hangar as several dozen of her dearest friends ate a buffet lunch nearby.

The white bulbous nosecone of the 1964 North American Sabreliner 50 test aircraft showed some wear, but the front edge of her wings still shined shiver. In a matter of minutes she’d be winging her way to McMinnville, Ore., and a permanent home at the Evergreen Aviation & Space Museum, never to fly again.

“That’s a little sobering,” admits Ivan McBride, director of flight operations for Rockwell Collins in Cedar Rapids, Iowa, who has 1,500 hours of flight time in the plane. “It’s a delight to fly. It’s a very forgiving aircraft.”

Good thing, because this jet has been through some rugged testing in its 49-year life, flying through storms to test weather radar and mimicking impending head on crashes, since it was acquired by Rockwell International for testing in California.

It came to Cedar Rapids a dozen years later, in 1976, and has served the Collins division well.

For the complete story by Dave Rasdal of The (Cedar Rapids) Gazette, click here.

Photo by Stephen Mally, The Gazette