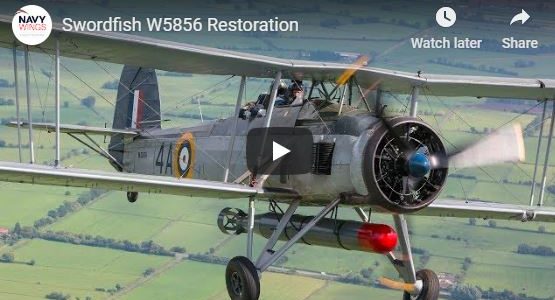 This is the story of the marathon 26 month restoration of the world’s oldest flying Fairey Swordfish, W5856, filmed at the Brough factory by British Aerospace in the ’90’s. What an extraordinary aircraft the Fairey Swordfish turned out to be. Born at the end of the biplane era, this was an aircraft totally unsuited to fight the war in which it became embroiled. Despite being deemed obsolete at the onset of hostilities, it not only outlived aircraft designed to replace it, but it gave sterling service, virtually unchanged, in all theatres throughout the war. This reliable and maneuverable aircraft, much loved by its crews, had its major honors at Taranto and in the sinking of the Bismarck, but it also played a huge part in the Battle of the Atlantic and with the Arctic convoys as well as campaigns across the globe.

The Swordfish W5856 is based at the Navy Wings Charity Heritage Flight at RNAS Yeovilton and is funded by public donations.