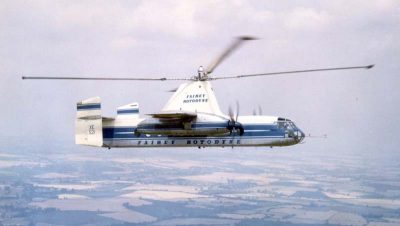 The Fairey Rotodyne was a 1950’s British compound gyroplane designed and built by Fairey Aviation and intended for commercial and military uses. The Fairey Rotodyne’s first flight was on 6 November 1957. The first transitions to horizontal powered flight were begun in April 1958. Initial problems with tip jet reignition at altitude were solved by October. Tip jet noise was excessive, which led to a modified production version with lower pressure tip jets.

Unlike the helicopter, the rotor was utilized solely for lift in autorotation. Control was achieved by means of elevators, a rudder and ailerons, although a degree of roll control could also be maintained by varying the angle of the rotor head. The aircraft demonstrated impressive STOL (short takeoff and landing) capability but could not takeoff vertically like a helicopter or hover. It had a topspeed of 213 mph, wingspan of 46 feet and a range of 450 miles. The 22,000-pound aircraft was powered by a Napier Eland engine. It was manufactured by the Fairey Aviation Company and Avions Fairey. Although the Rotodyne was met with commercial interest, Fairey was taken over by Westland, and the Rotodyne program closed circa 1962.

See the Fairey Rotodyne flying in this video posted by JRaero01.

See it flying also at the 1959 Farnborough air show.