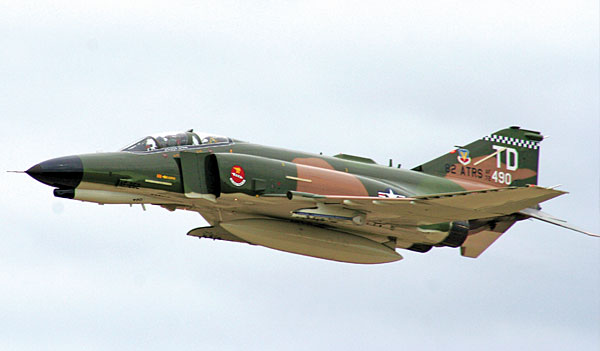 The 82nd Aerial Target Squadron (ATRS) based at Tyndall AFB, Florida, operates a fleet of surplus aerial target drones to train fighter pilots in the art of air-to-air combat. Some of these drones, designated QF-4, are now used to tow banner targets behind them to give pilots additional gunnery training.

Originally built by the McDonnell Douglas Corp. in St. Louis, Missouri, the F-4 Phantom II series of aircraft featured a tandem seat, twin-engine arrangement for all-weather, long-range interception of enemy aircraft at altitudes exceeding 50,000 feet at speeds beyond Mach 2. The final USAF air-superiority fighter version—the F-4E—featured a nose-mounted 20mm cannon as well as radar-guided and heat-seeking air-to-air missiles; 5,057 were produced in the U.S.

Specially trained maintainers attach the 60-foot-long banner to the F-4. “We attach the banner with a 120-foot chain to 1,600 feet of cable, so there is 1,800 feet of clearance between the Phantom II and the banner,” said Tech. Sgt. Phillip Praeger of the 82nd ATRS maintenance and logistics section. “This leaves plenty of room between the banner and the F-4, in case the target is missed,” he added.

Lt. Col. Gregory Blount, the 82nd ATRS director of operations, began flying the F-4’s new mission two months ago. “We have a special training program for pilots on Tyndall, and we start with the most experienced because it’s a new program,” he said. “This is just another way the venerable Phantom continues to serve the Air Force nearly 50 years after it began service.”—Steve Pace