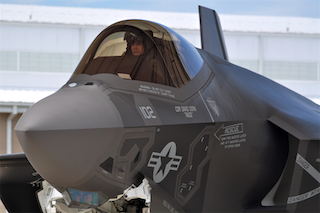 The Lockheed Martin F-35C Lighting II, an aircraft affectionately dubbed “Charlie” and also known as the Joint Strike Fighter, was rolled out in a special ceremony at Eglin Air Force Base on Tuesday. The fifth-generation jet is the latest in defense machinery and it’s what some call “the future” of naval aviation.

At last it’s here; ready for the Strike Fighter Squadron 101, known as “The Grim Reapers,” to put it to work. These naval aviators are folded into the 33rd Fighter Wing on Florida’s Eglin Air Force Base, the first line of defense for all things F-35.

“The F35-C is the final complement to our fleet at Eglin. All F-35 pilots, maintainers and intelligence experts make first contact with the F-35 right here at Eglin Air Force Base,” said Canterbury.

For video and the complete story by Addie Hampton of WMBB-TV, click here.