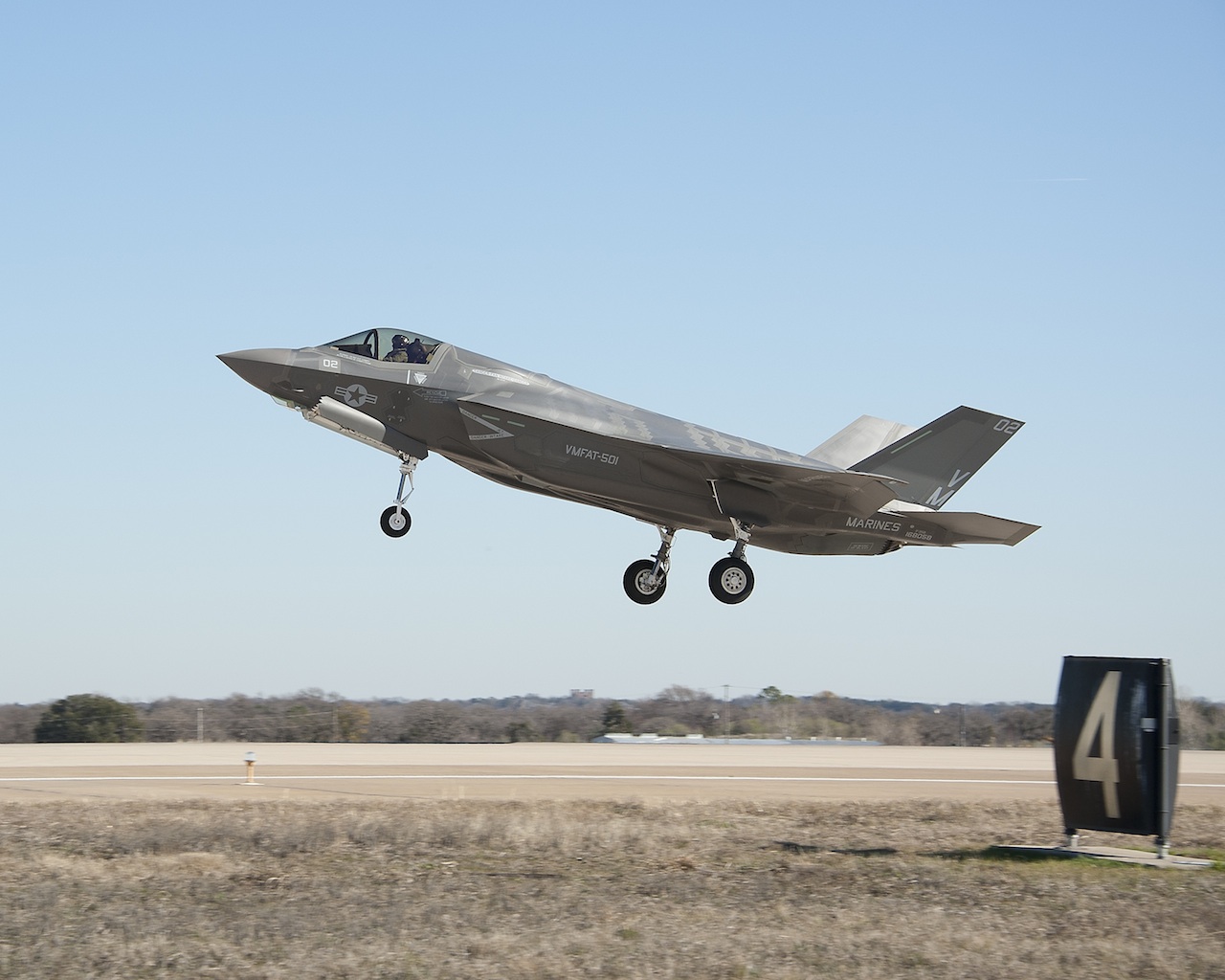 The engines roared overhead as a Lockheed Martin F-35B fell into formation. Although this is a basic maneuver for U.S. test pilots, the possibilities for combat environments created by these elite aircraft working together are anything but mundane.

The F-35, which features three variants to be used by the Marine Corps, Air Force and Navy, is a single-seat aircraft capable of stealthy operations, equipped with an enhanced computer technology system. The Marine Corps B variant is also capable of performing short takeoffs and vertical-landings while maintaining the conventional operations of other airplanes.

“The F-35 is a fifth-generation fighter; but it’s more than just a stealthy airplane,” said Marine Col. Art Tomassetti, a pilot who has been with the JSF program since 1998. “It goes beyond stealth and low observable capability. It brings together everything that today’s computer and digital age can bring to how the airplane flies and how it’s maintained.”

The F-35 is an ideal combination of stealth, sensor fusion and a robust digital flight control system making it not only easy for a pilot to fly but easy to identify and engage targets in the battlespace.  Along with ease of flight, the F-35 also allows pilots greater situational awareness.

“When you look at the F-35, you can’t look at it as a single airplane against another single airplane,” Tomassetti said. “You have to look at a group of F-35s working together, then you really get to take advantage of what the F-35 brings to the battle space. The ability of the airplanes to use a variety of sensors to gather information and share the information they gather between planes is  truly incredible.”

With the F-35, pilots can access information about possible targets and threats from supporting F-35 aircraft via data links, which allows them to see more and identify more of what is happening in the battle space, Tomassetti said.

“In today’s environment, it’s usually not just the Marine Corps by itself. We’re operating with the Navy, Air Force and coalition partners,” Tomassetti said. “What happens when we’re all in F-35s? Now we can all share that information and perhaps more importantly we are all operating from a common reference point, the F-35. In terms of coalition warfare, this airplane further increases everyone’s situational awareness and interoperability to a greater extent than anything we have out there today.”

Currently, the military is only training seasoned pilots on the new airplane at Eglin Air Force Base near Fort Walton Beach, Fla.

“Harrier training was nine months long, and I spent about 60 percent with landing and takeoff maneuvers,” Tomassetti said. “It took about a year after that for me to be combat checked out.  The F/A-18 training did not have to spend the time teaching (short take-off and vertical landing) maneuvers and STOVL handling, and they could focus more on tactics.  The F/A-18 also has a fly-by-wire control system making it an easy airplane to fly. The [F-35B] is so easy to fly because the computer does most of the work, so we won’t have to spend so much time on the basics.”

When new pilots are allowed into the program, they will find themselves in a unique training environment along with enlisted aircraft maintainers and mechanics from all three branches of service and also coalition partners from several foreign nations.
These service members will learn how to operate and maintain the F-35 through a digital training environment. This kinetic learning system allows the learning to occur through touching and doing, rather than seeing and hearing.

“The fact that we’re starting with the same airframe, same formations, same weapons capabilities, I think that already puts us at a better starting point when we show up to a combat theater together,” said Air Force Lt. Col. Lee Kloos, squadron commander for the 58th Fighter Squadron, of the integration of forces with the F-35.

Kloos, who has more 2,100 hours flying the F-16, said having the Air Force, Marine Corps and Navy field the same airframe allows a common frame of reference for pilots regardless of service.

The aircraft is also a joy to fly, Kloos said.  Despite the advanced technology and complexity of the aircraft, it’s a very easy aircraft to fly, and basic pilot actions remain the same as in any fighter aircraft.

“Pull back on the stick and the trees get smaller, push forward and the trees get bigger,” Kloos said.  It is a stable and well-balanced plane designed for today’s generation who grew up playing video games, he said.

Comparatively speaking, the F-35 has a clean cockpit. Instead of a multitude of switches inherent of many aircraft, the F-35 has two touch screens with interfaces similar to a tablet computer.

For the maintainers, things are a little tougher.

“I was working on the F-15C and -D models,” said Air Force Staff Sgt. Matthew Reed, F-35 A maintainer. “The F-35 is a completely different aircraft. The technology is challenging at times.”

Since the F-35 is still in operational testing, the maintainers and pilots work through all the bugs together. On a continuous basis, personnel are testing the aircraft in new maneuvers and capabilities. Once these are monitored and assessed, the pilots are cleared to perform them in their daily flight operations.

“Today our training consists of the basics of takeoff, landing, navigation and basic formation as we wait for the flight clearance to expand and allow us to train specific mission sets,” Tomassetti said.

Air Force maintainers, the first service members to work on the F-35, use the maintenance side of the computer to do preventative diagnostics and pinpoint possible problems.

With the pilots and maintainers working together, the Air Force and Marine Corps have flown hundreds of training sorties since their first flight in 2011. They continue to fly daily to bring the F-35A, the Air Force’s conventional landing and take-off variant, F-35B, the Corps’ STOVL variant, and F-35C, the Navy’s carrier-based variant, closer to combat operations.