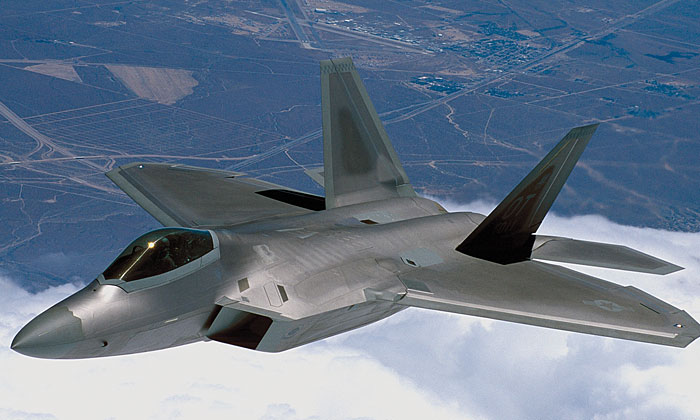 The U.S. Air Force experienced a setback with the F-22 Raptor at one base on October 21 immediately after announcing, with seemingly misplaced fanfare, that America’s superfighter was back in the air again.
The 1st Fighter Wing at Langley Air Force Base, Virginia idled its F-22s—again—again after a pilot reported oxygen loss in mid-flight. “Part of our protocol is to allow units to pause
operations … to ensure safety,” the Air Force said in a statement issued at the Pentagon.
Raptors had returned to flight earlier in the month after a four-month grounding while a scientific advisory board conducted a study of the F-22 and other aircraft using Onboard Oxygen Generation Systems (OBOGS). Problems with the costly, diamond-winged superfighter were initially thought to be responsible for a fatal crash and may be the cause of toxins found in the bloodstreams of some of the Air Force’s 400 Raptor pilots—all of whom lost their cockpit currency during of the grounding and had to be requalified.
Despite concerns that pilots were passing out due to a lack of oxygen, Air Force officials authorized the planes to resume flying but acknowledged that officials had not identified the problem vexing the F-22 fleet. This prompted Mark Thompson of Time magazine to write that it was “amazing” that “the problem was serious enough to ground the planes but apparently not serious enough to fix.” The new decision to ground fighters only at Langley came after Raptor squadrons made a minor modification to the OBOGS system. The Langley grounding suggests the mod hasn’t solved the problem.
Between May and October, the Air Force’s 158 Raptors (out of a planned purchase of 187) were parked indoors draped in protective materials. After ordering the fleet-wide stand-down, officials concluded that OBOGS was not a factor in the November 16, 2010 crash that killed F-22 pilot Capt. Jeffrey “Bong” Haney, 31, of the 525th Fighter Squadron “Bulldogs” at Elmendorf, Alaska. Haney’s aircraft no. 06-4125 went down 100 miles northeast of Anchorage, an accident board announced, because of a malfunction with the engines’ bleed air system, that caused several other systems aboard the Raptor to shut down abruptly.
After the Haney crash, medical tests found toxins in the bloodstreams of Raptor pilots at several bases.
When the F-35 Lightning II Joint Strike Fighter was grounded briefly and temporarily in August after an electrical failure, the Pentagon was taking hits from critics who questioned the cost and capabilities of the latest generation of jet fighters. Some ask why the F-22 has never been in combat. Advocates respond that the F-22 and F-35 are needed for “peer” warfare against a modern nation-state with high-tech weaponry. They never fully explained why F-22s were returned to the air when the cause for grounding them remained undiscovered and haven’t provided a full explanation of the latest grounding, either. —Robert F. Dorr