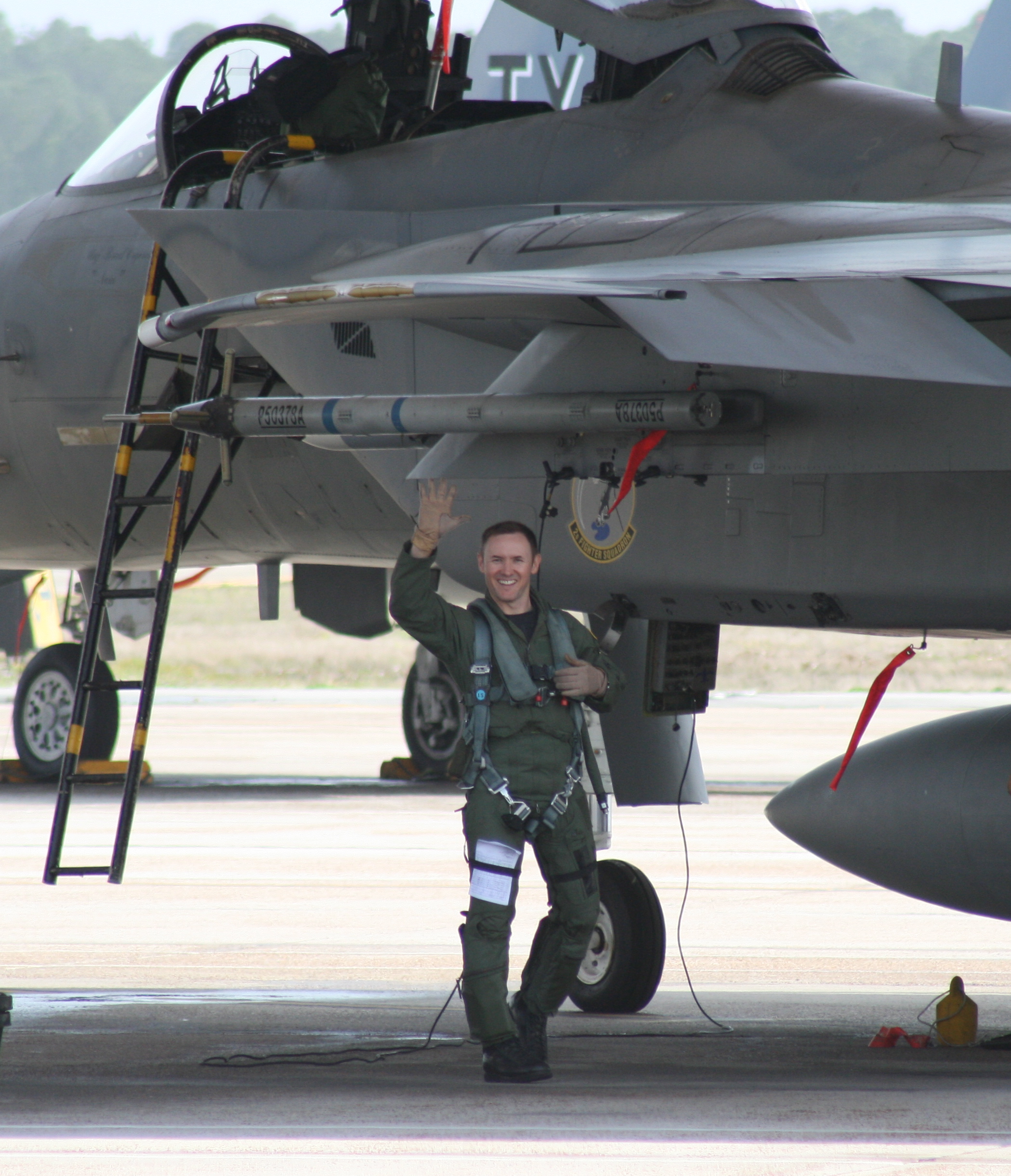 Powerful thrust paired with unparalleled agility propels the grey fighter jet through the sky, in ways unfathomable to earlier generations of pilots. The complex system of technology that makes up the Lockheed Martin F-22 Raptor exposes the human body to altitudes and G-forces rarely experienced by other fighter pilots.

The medical community’s first-hand knowledge of these unique conditions, however, is limited by the fact that flight surgeons can’t accompany a pilot in the single-seat F-22. While a doctor can’t ride tandem in the Raptor, the U.S. Air Force can put qualified physicians in the driver’s seat under the Pilot-Physician Program.

Lt. Col. (Dr.) Jay Flottmann, a former flight surgeon and now fully qualified F-22 pilot and 325th Fighter Wing chief of flight safety, took on the challenge and is helping the fighter community ensure the safety of the F-22s. Flottmann is one of 11 pilot-physicians in the Air Force, making him a member of an exclusive band of knowledgeable experts who are becoming more valuable as new technology offers new tasks for the human body.

While some have come before him in various other aircraft, Flottmann is the first pilot-physician to tackle the Raptor. However, his journey began with a calling for medicine.

“Once I graduated medical school I was commissioned as a captain in the medical corps and was assigned to Keesler Air Force Base, Miss., to begin post-graduate training,” Flottmann said. “While at Keesler (AFB), I decided that I wanted to be a flight surgeon, not knowing what that was.”

The doctor went to Brooks Air Force Base, Texas, to attend the Aerospace Medicine Primary Course. There, he and some classmates received an orientation flight in a T-37 Tweet, a small economical twin-engine jet trainer.

After that ride, he was hooked.

The doctor is in: A long way to the cockpit

“I could not believe that people get paid to fly airplanes,” he said. “It was the most fun thing I had done, and I was amazed at how awesome the experience was.”

Flottman began asking whether there was a program that would allow him to be a pilot and a doctor. While pilots have been known to attend medical school, there didn’t seem to be an established way for an Air Force doctor to attend pilot training.

“So here’s a guy who cracked the nut,” Flottmann said. “Now that it had been done, I told my commander at that time I wanted to do the exact same thing, and he helped me put together an application for pilot training.”

Flottmann was accepted into the program himself and went to Moody AFB, Ga., to begin pilot training in the T-6 Texan. At the end of his training, he was the only student in his graduating class to be awarded a slot for the F-15C Strike Eagle, his first choice. Despite this success, Flottmann began putting together an application to be considered for the official pilot-physician specialty code.

“While I was at Laughlin AFB, Texas, I finished the application process and started working an exception to policy to go back to the medical corps in the Air Force specialty code pilot-physician career rating, because the medical corps owns that duty code and it required a competitive category transfer,” he said. “My AFSC was changed and that’s about the same time that the F-22 began to experience a rash of physiologic problems.”

In 2009, wing leaders realized they needed somebody with medical and operational flying knowledge to assist with the problems of the new jet. The program director of the Pilot-Physician Program recommended Flottmann for the job.

“Many people didn’t know about this program or this job, and many still don’t know about it,” Flottmann said. “When I first arrived at Tyndall (AFB), Fla., as part of the F-22 program, most weren’t even sure what to do with someone like me. So, I deployed for six months. When I came back in November 2010, that’s when I began to train in the F-22.”

In May 2011, a stand-down grounded the F-22 because of its technical difficulties. With the jets off the flightline, the pilot-physician became more busy than ever before.

“I became heavily involved in the safety investigations,” Flottmann said. “I was brought on board as a pilot and medical member and we started a comprehensive and thorough, deep-dive investigation.”

His team conducted exhaustive interviews and performed extensive research — looking to understand what, at the time, were unexplained physiological incidents.

As a result, Flottmann’s team advised senior Air Force leaders on how to study the incidents and mitigate risks. They also helped keep current information on the investigation flowing to the F-22 community, U.S. Navy and NASA researchers who partnered with the Air Force and interested members of Congress and the media.

“We introduced the idea of flying with a pulseoximeter and incorporating it into the helmet — something unique to the F-22,” Flottmann said. “No other aircraft has that feature. We developed an incident response protocol and identified a problem with the upper pressure garment, which was functioning differently in an F-22.”

Trained as a pilot and as a qualified medical professional, Flottmann was able to evaluate the occupational medical environment, studying the human factors involved with piloting the multi-million dollar airframe.

“We found verifiable and tangible issues and we addressed them,” Flottmann said. “Some things I even experienced myself while flying the F-22, and I did the research to discover what was going on physiologically.”

Looking into the future

The fighter community continues to become more technologically advanced and more capable. The need for speed and height, meanwhile, has pushed the envelope of technology and pilots’ physical limitations.

“Man has introduced some (new) variables on human physiology, and we are more thoroughly examining the effects of those variables and seeking to alleviate them while maintaining the high-performance of the fighter itself,” Flottmann said.

Flottmann thrives in the pilot’s seat and his success is now reflected in the restructured Air Force Insruction 11-405, which now allows qualified flight surgeons to apply to pilot training. Capt. William Smith, from the 325th Medical Group, was recently selected as the first flight surgeon to attend pilot training through this official channel, following Flottmann’s footsteps.

“Right here at Tyndall (AFB) we are engaged and active in growing the program, so getting people like Captain Smith in the program is important for its viability,” Flottmann said. “We are thrilled for him and who knows if he will come back to fly the F-22 like I do — the sky’s the limit.”