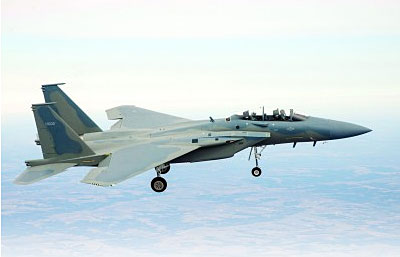 On 20 February 2013, an F-15SA advanced fighter aircraft destined for the Royal Saudi Air Force (RSAF) made a successful first flight out of Boeing’s St. Louis, Missouri facility. The flight went as planned, meeting all test objectives to support the on-schedule development of this new version of the F-15 Eagle. The F-15SA flight test program will include three instrumented F-15SAs flying out Boeing facilities in St. Louis and Palmdale, California. Deliveries of the new F-15SA aircraft to the Kingdom of Saudi Arabia are scheduled to begin in 2015 and conclude by 2019 when the last of 84 F-15SAs is to be delivered.

“The successful first flight of the F-15SA is a tremendous milestone for the program and a testament to the relationship between the USAF, Boeing, and our RSAF partners,” said Lt. Gen. C. D. Moore II, commander Air Force Life Cycle Management Center at Wright-Patterson Air Force Base in Dayton, Ohio. “The F-15SA will add critical capability to the RSAF and enhance the security of the Kingdom of Saudi Arabia,” General Moore added.