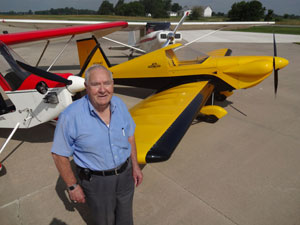 Lowell Farrand of Ligonier, Ind., has lived a life of quiet satisfaction, concentrating on the activity that makes him the happiest: flying. Now at age 80, Farrand has been honored by the aviation industry for his many decades of dedication to aviation safety and research.

He flew last week to Oshkosh, Wis., where Thursday night he received the 2013 Tony Bingelis Award, recognizing his involvement in the homebuilt aviation community. It was presented by the Experimental Aircraft Association (EAA) at the group’s annual convention.

For the complete story by Bob Buttgen of The (Ligonier) Advance Leader, click here.

Photo by the Experimental Aircraft Association