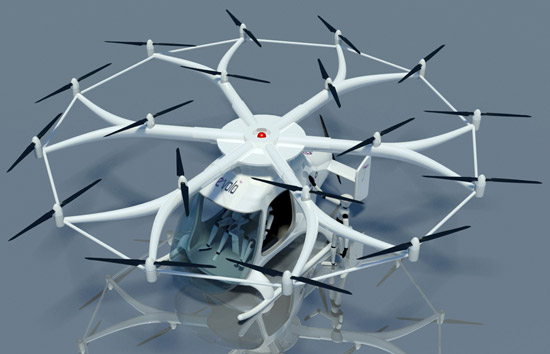 Remember that crazy 18-rotor personal helicopter proof of concept from e-volo that we wrote about last November? Looks like the company is ready to take the next step towards making a consumer version of this thing, and ultimately, it may not even be that crazy at all.

Yes, we know that this thing looks bizarre. Very, very bizarre. But if you think about it, this kind of distributed design for a helicopter makes a whole lot of sense. It’s relatively cheap to build and fix because the motors are off-the-shelf and you can get a bulk discount on ’em. And even though you’ve got lots of motors, they’re all very simple, so there isn’t much that can go wrong. If something does go wrong, well, you’ve got eighteen motors, and the craft can survive losing up to four of them all at once. As an absolute last resort, you’ll also have a built-in parachute system. Oh, and did we mention that it’s electric and you can fly it for 30 minutes for just $10?

e-volo is planning to develop three different versions of what they’re calling the Volocopter. There’ll be a single-seater that’s ideal for commuters, a larger two-seater version, and an unmanned copter with a 450 pound payload capacity. Each will be able to travel at least an hour at 60 mph at altitudes up to 6,500 feet, taking of and landing vertically right from your driveway. For longer trips, the two-seat version will come with a gas-powered range extending engine like the Chevy Volt.

The development timeline for the Volocopters is about two years, which seems optimistic, but what the heck, we like optimism. The cost hasn’t been discussed yet either, but our guess would be something in the low six figures: more expensive than a new car, but cheaper than a plane and way cheaper than a traditional helicopter.

Check out some renderings of the Volocopter 1P and 2P, below.

Editor’s Note: We’ve changed the count from 16 rotors to 18 to match the concept presented, despite documentation otherwise. It’s worth noting that e-volo observes modular design principles, and the company’s preceding hover concept used 16 rotors. Thanks to C to the J in the comments below for the catch.