This earlier visit was related to the development and testing of a “flying bomb” for the Navy. This work was an outgrowth of a project started by Elmer Sperry to build a gyro stabilized, unmanned airplane for the Navy.

Several years after he came to the United States Norden went to work for Elmer Sperry to to him as “Old Man Dynamite”), fell out with Sperry over patent rights, and left the company in 1913 to start his own company. However, he continued to work for Sperry as a consulting engineer on Navy projects.

Elmer Sperry had done a lot of work on gyro stabilization and held many patents on gyrostabilizers for automobiles, ships, and airplanes. This work led to an interest in automatic control of airplanes and his experiments in this area led to his son Lawrence demonstrating the system in a Curtis flying boat in 1916. While serving on the Naval Consulting Board during World War I, Sperry became aware of the military need to reduce the danger to bomber pilots and advocated with Secretary of the Navy Josephus Daniels for an unmanned “aerial torpedo.” Based on his experience with gyros and the relative immaturity of radio, he chose to use a gyro-based guidance system.

He had continued working on the control system and installed an updated version on Curtiss N-9s provided by the Navy. The first flights (in Long Island) took place in November 1917. The flights weren’t unmanned – a safety pilot handled takeoffs and landings as well as the return flight to base after a preset range was reached. These flights were intended to test the control system and were precursors to unmanned flights of a new aircraft (known as the “Flying Bomb” or FB) specially designed for the purpose by Glenn Curtiss. 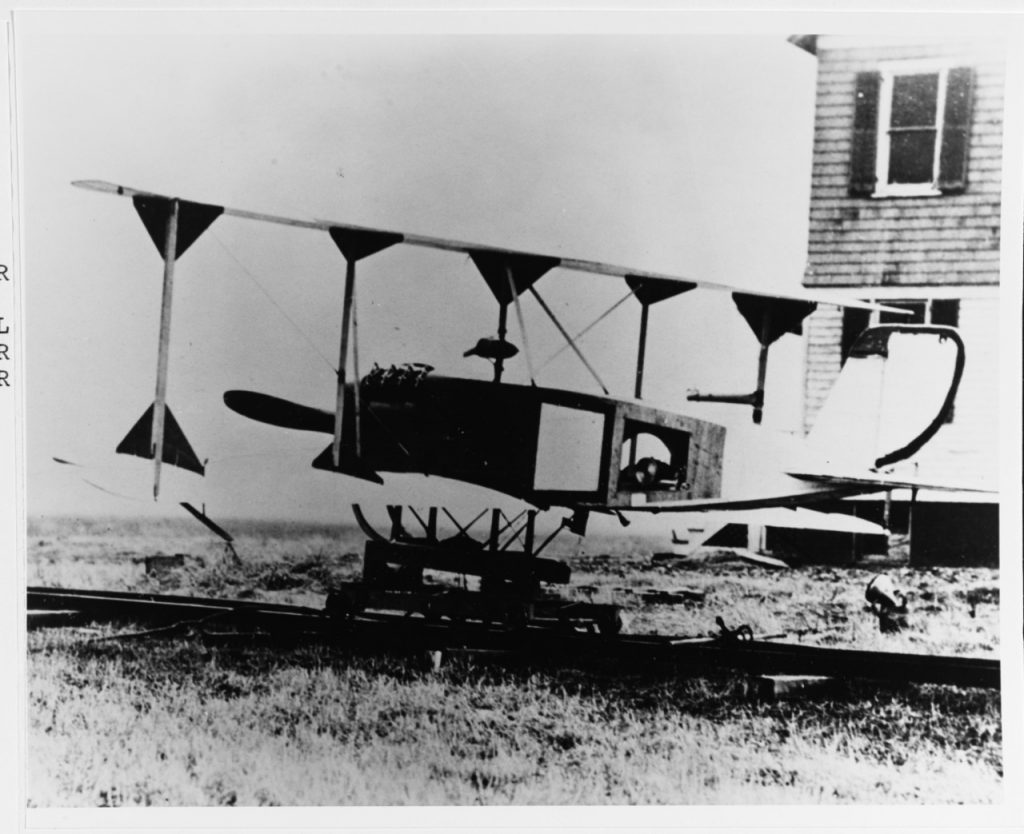 The Curtiss Flying Bomb had an empty weight of 500 pounds, 15 foot length, 25 foot wingspan, top speed of 90mph, and the could carry up to 1,000 pounds of explosives. Many launching mechanisms were tried, including sliding on a wire, a catapult, and from the roof of an automobile, before bringing Norden in to redesign the catapult system. (U.S. Navy photo)

The Navy ordered 10 of the FBs and the first was delivered in November 1917. The first three flights took place in December and resulted in three failures and the destruction of two airplanes. After the launching mechanism was identified as the roblem, Carl Norden was brought in as a consultant to help redesign it. The loss of two more aircraft led to the conclusion that they didn’t completely understand the flight characteristics of the FB either. They modified one of the aircraft to carry a pilot and undertook a flight test program. After making changes to both the aircraft and the control system, the FB flew successfully in March 1918. The control system terminated the flight after flying 1000 yards and the aircraft then crashed into the water. Sperry considered it “the first entirely successful flight of an automatic missile in this country if not in the world.” Unfortunately, flights during the summer and fall were failures and the last of the aircraft was destroyed in a test failure in September 1918.

Meanwhile, tests with the N-9 had continued and Sperry decided to conduct a test with an unmanned N-9. This test was to focus on the control system by eliminating the uncertainties caused by the special airplane and the launching system. The test took place on 16 October 1918. The N-9 took off normally and flew a controlled straight-line path to the planned range with very little error. However, the distance control device failed and the flight didn’t terminate. The N-9 was last seen as it disappeared over the horizon at an altitude of 4000 feet. Although the Navy considered the flight to be a success, the end of the war saw interest in the aerial torpedo decline and the contract with Sperry ended in January 1919.

In late 1918 the Navy decided on a fundamental change to their approach. The work was to move to a naval station and five aircraft from the Witteman-Lewis Company were bought to replace the Curtiss Flying Bomb. In addition, Carl Norden was to lead the effort. Norden and a small staff, a launching system, and aircraft arrived in Dahlgren in late May 1919. After some preliminary work, it was decided that the runway at Dahlgren was too rough and that the airplane had stability issues. After both were corrected, the first flight at Dahlgren took place on 18 August 1920 and was a failure. The second flight, a month later was successful. The final flight, also a failure, took place in April 1921. Faced with budget issues, the program was cancelled and Norden returned to his bombsight work. While his focus was on the bombsight, he returned to work on unmanned flight repeatedly over the next few years.

The gyro-guided aerial bomb was, at best, only moderately successful and interest shifted to radio control. Representatives of the Bureaus of Ordnance (BuOrd) and Engineering (BuEng) visited Dahlgren in October 1921 to work out the procedures for conducting radio control research there. The program was approved and work started in January 1922.

Norden was asked to install his control system on an N-9 seaplane. A radio system was developed and tested by the Naval Aircraft Radio Laboratory (later part of the Naval Research Laboratory) by the end of the year. The systems were mated in July 1923 and, with LT John J. Ballantine as safety pilot, was flown successfully more than 30 times that summer and fall. The final test of the year, on 14 November, was flown by radio control for 25 minutes. 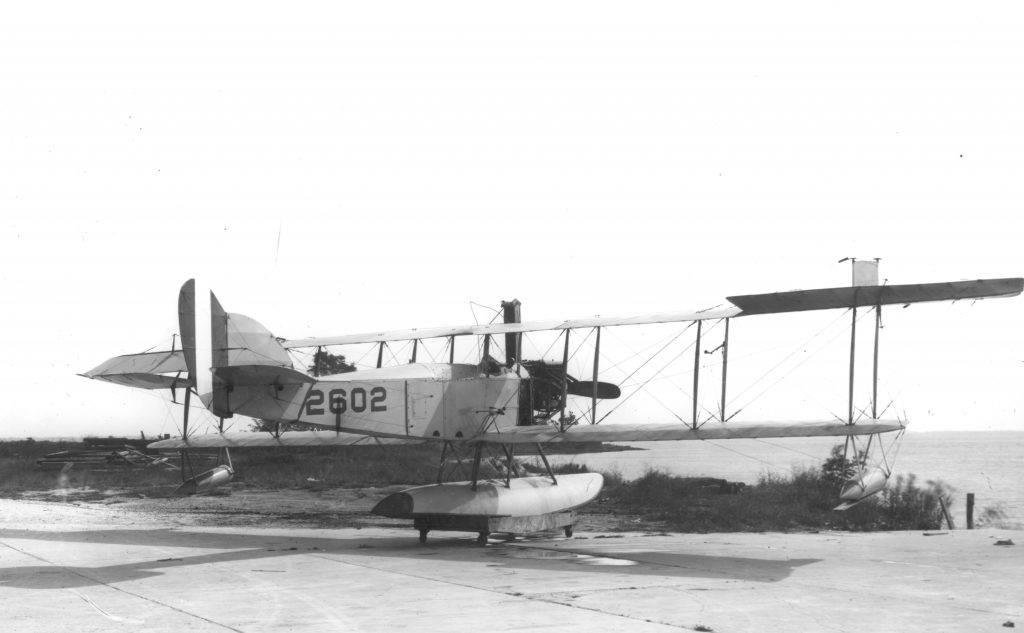 Testing was stopped for the winter and during the hiatus NRL improved the radio control system. Testing resumed in July 1924 and continued into September, again with a safety pilot. After two successful radio-controlled flights on the morning of 15 September, Ballantine and Carlo Mirick (the NRL radio engineer) decided to attempt the first completely unmanned test of the system. Ballantine controlled the aircraft from the radio-control station for the entire forty minute flight. Although the aircraft was damaged on landing, this is considered the first time that a remotely-controlled unmanned airplane took off, maneuvered, and landed.

The radio gear was moved to a Vought VE-7 airplane which flew successfully in December of that year. After stopping for the winter, testing resumed in June 1925. Ballantine completed 28 more tests before leaving Dahlgren in September. Testing continued with LT Valentine H. Schaeffer as safety pilot until the final flight on 11 December 1925. This last test was unmanned and ended when the Vought crashed on takeoff.
Even though the project was considered successful and was never officially cancelled, no further tests were conducted. Once again, it was a casualty of the very limited interwar Navy research budget and, perhaps, to the success of Norden’s bombsight. The belief was that the bombsight allowed bombers to fly above the effective height of anti-aircraft fire while maintaining bombing accuracy. If true, this would reduce the risk to pilots, the very factor that drove Sperry’s initial interest and development.

After the successful demonstration of the automatic control system in 1916, Sperry had contacted the Army Signal Corps in an attempt to interest them in an aerial torpedo. Although they didn’t reply to that letter, Major General George O. Squier, Army Chief Signal Officer, finally attended a demonstration of the control system in November 1917. He recommended to the Aircraft Board that the Army pursue this capability and Charles F. Kettering was given a contract to do just that. His team (which included Orville Wright and Elmer Sperry) proceeded to develop the Kettering “Liberty Eagle” (better known as the “Bug”). The Bug had a successful first flight in July 1918 and, between then and October 1918, had three successes in 10 tests. As with the Navy, interest waned after the end of the war and the project shut down in November. Six Bugs were sent to Long Island for further tests in December and January but only one flight was successful. The Army was still interested in this capability and sent 12 Bugs to Florida for additional tests. There were 14 tests in the fall of 1919 with just four successes. That marked the end of the Kettering Bug project. 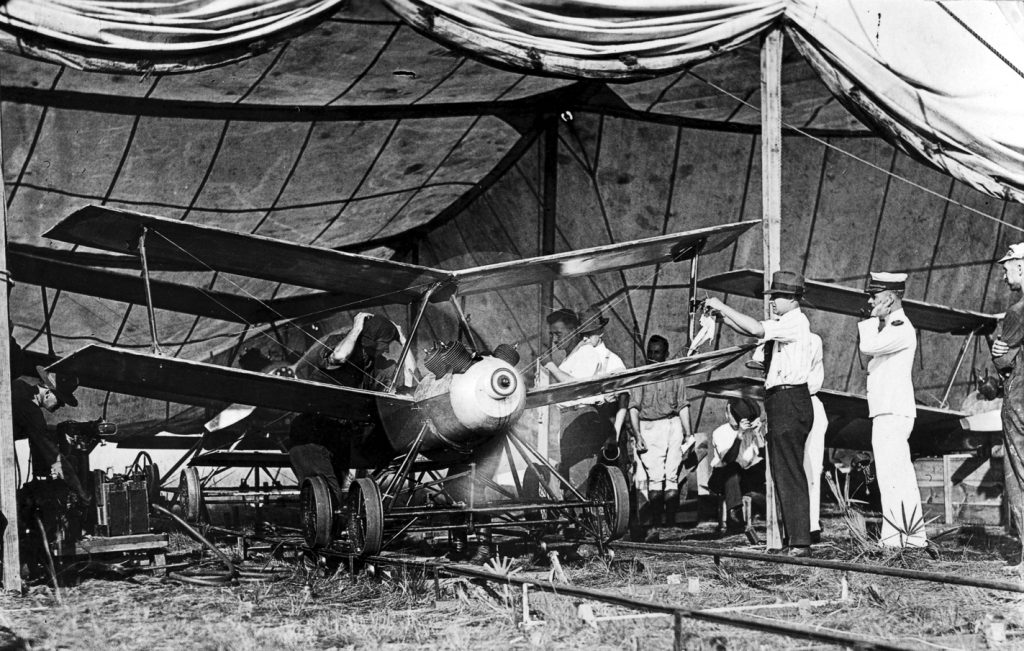 The Kettering Bug had a gross weight of 530 pounds, 12 ½ foot length, 15 foot wingspan, top speed of 50mph, range of 75 miles, and the ability to carry a 180 pound warhead. The fuselage was made of wood laminates and papier-mache and the wings of cardboard. It was launched using a track and dolly system. (USAF photo)

There were a good number of successful radio-controlled flights (with a safety pilot) in 1924-25, but flights of truly unmanned aircraft were much less successful. The gyro-guided aerial bomb was, at best, only moderately successful. The Sperry-Navy system had one success in 12 tests and the Norden-Navy system had one success in three tests at Dahlgren. Kettering had somewhat better results – seven successes in 24 tests. The consensus of opinion is that, in various ways, the technology and testing methods of the day were not up to the challenge. For example, there was a limited knowledge of aerodynamics which hindered the development of both the airplane and the control system. In addition, testing was mostly trial and error and, because of the destructive nature of the tests, little was learned from the failures. 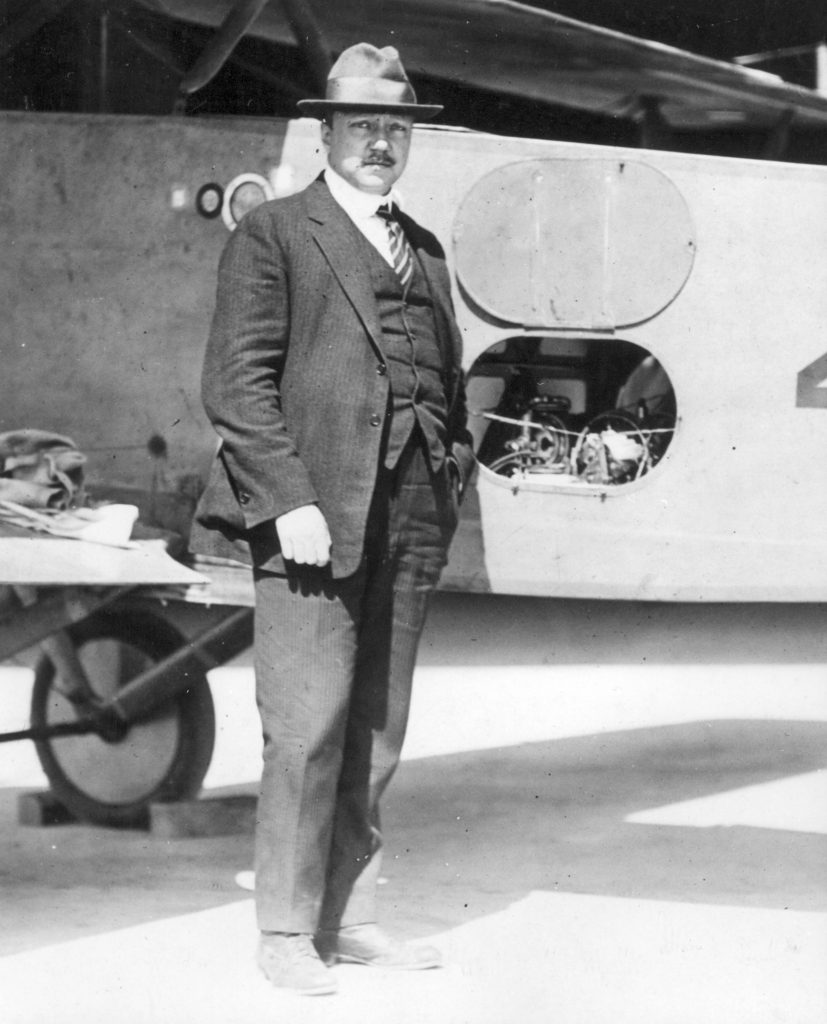 Carl Norden with his control system installed in a Vought VE-7. Born in Semarang, Java to Dutch parents, Norden studied mechanical engineering at the Federal Polytechnic Institute in Zurich, Switzerland and immigrated to the United States in 1904. His relationship with Sperry was a rocky one – Sperry disliked Norden’s appetite for “vile black cigars” – and other contemporaries described him as “self-centered, impatient, domineering, a perfectionist … and of the highest ethical standards.” (U.S. Navy photo)

Navy interest picked up again in 1936 when war seemed imminent but Dahlgren wasn’t involved. Concurrently, the Army showed interest, which along with a Bureau of Aeronautics project, led to efforts to develop target drones and an assault drone during World War II.

Technology and its applications and Dahlgren’s role in research and development have both significantly evolved since Norden’s time at the Naval Proving Ground. But a line can clearly be drawn between these pioneering systems and those of today. For example, while the Germans used essentially the same gyro-guidance technology to guide the V-1 and V-2 missiles during World War II, considerable progress has been made in the development of both missiles and guidance over the decades since. Cruise missiles and unmanned aerial vehicles are becoming ubiquitous and the Dahlgren Division of the Naval Surface Warfare Center (NSWCDD) has and continues to play an important role in their development for the Navy and America’s defense.