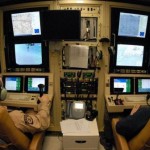 How do drone pilots stay alert during 12-hour missions, especially considering that they’re in a control room while the UAV they’re piloting can be hundreds of miles away? This Gizmag article by David Szondy shares how MIT researchers are looking into ways to combat pilot boredom during long drone flights:

The saying that “war is long periods of boredom punctuated by moments of sheer terror” could have been written for military UAV pilots. The news media like to portray drones like the MQ-1 Predator as robot warriors, but behind each one is a human pilot with only limited powers of endurance. On long missions, pilots get bored and distracted, so a team from MIT’s Human and Automaton’s Lab is studying how what can be done to stave off boredom and keep pilots alert.

Flying military drones is often less like being a pilot and more like being a babysitter. Shifts can last up to twelve hours and missions can go on for weeks or even months. In such a situation, maintaining concentration is difficult as the craft circles endlessly over a target where nothing is happening. Boredom does more than make a twelve-hour shift seem like twelve days, it can also cut down on reaction times when the pilot’s attention is needed.

As part of the MIT investigation led by Mary “Missy” Cummings, associate professor of aeronautics and astronautics and engineering systems at MIT, groups of drone pilots were given personality tests and then videotaped as they ran simulated missions in four-hour shifts where they monitored four virtual UAVs. They were assigned “search tasks” that involved investigating areas and labeling targets as friendly or hostile. If the target was hostile, the pilots would order the UAV to fire and points were assigned for correctly destroying hostiles. Meanwhile, the videotape recorded when or how a pilot was becoming distracted.

“We know that pilots aren’t always looking out the window, and we know that people don’t always pay attention in whatever they’re doing,” Cummings said. “The question is: Can you get people to pay attention enough, at the right time, to keep the system performing at a high degree?”

The problem is partly one of personality. The questionnaires measured the pilots in five categories: extroversion, agreeableness, conscientiousness, neuroticism and openness to experience. It was found that people who scored highly on conscientiousness kept the most alert, but also hesitated the most about firing a weapon.

“You could have a Catch-22,” Cummings says. “If you’re high on conscientiousness, you might be good to watch a nuclear reactor, but whether these same people would be effective in such military settings is unclear.

One lesson learned from the results is that a bit of distraction is a good thing and that “busy work” can help to break up drone piloting monotony and increase effectiveness. Cummings’ team is continuing their work, focusing on such ideas as introducing alerts to redirect pilot attention, altering shift duration and finding the optimal period for operator productivity. A study of their results will be published in the journal Interacting with Computers.