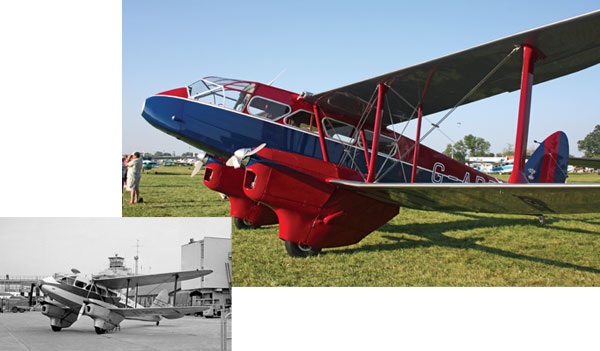 As everyone knows, few DH 89 Dragon Rapides remain airworthy today. Constructed of wood and fabric, time has deteriorated their glued joints, and timber airframe components have rotted on these iconic 1930s British passenger biplanes. So the arrival of a Dragon Rapide at the EAA’s AirVenture Oshkosh was a delightful surprise.

Touching down at Oshkosh with a squeak of tires on concrete and some deft rudder work, Gerald Yagen of Virginia Beach taxied his pristine biplane transport from runway to parking amidst comments of “What is that?” and “What a beauty!” This Dragon Rapide has had a long and arduous journey back to full health. The most recent chapter includes a trip to Warren Denholm’s world-renowned workshops— Avspecs at Ardmore airport, Auckland, New Zealand—that specialize in rebuilding old wooden aircraft (Gerald now has a DH 98 Mosquito on the go).

The prototype DH 89 was a scaled-down version of the 4-engine DH 86, and it first flew on April 17, 1934. This particular aircraft (now registered as G-ADDD) wasn’t built until 1944 (RAF serial HG724, c/n 6709), even though it’s finished in the 1935 colors of a Dragon Rapide flown by Edward, Prince of Wales. It was one of 75 built by Brush coachmakers of Loughborough, England, as part of an RAF order for 475 DH 89s aka “Dominies” for use as twin-engine trainers and communications aircraft. Once demobilized, it became G-AKPA with Newman Airways of Croydon, then an executive transport and, in 1962, it was exported to Ireland as EI-AML, the first aircraft of new Dublin-based charter airline Aer Turas. After spending some time in France, it was imported to the U.S. in November 1972, becoming N89DH. In October 1987, it was sold at auction for $75,000 to Robert Hood in Missouri. Gerald Yagen acquired it in April 2007; it was in condition requiring much TLC (and money!) to make it airworthy again. After being shipped from New Zealand to Virginia Beach, it completed its first post-restoration flight in the U.S. on May 19, 2010—and, of course, it won Best Transport at Oshkosh.— Geoff Jones