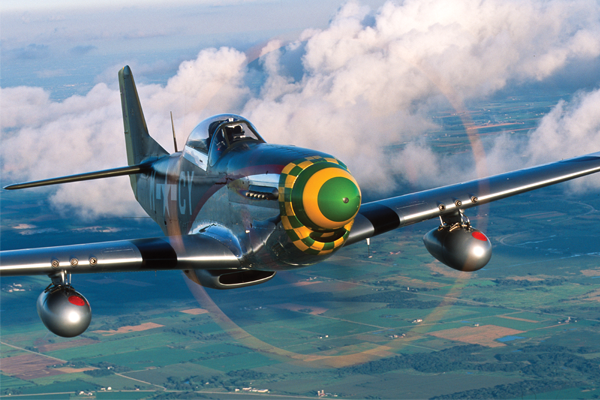 The early strategy of the 8th Air Force fighter groups was to stay with the bombers, escort them, save them, and to not leave them and go chasing after the Luftwaffe. That all changed when General Jimmy Doolittle took over in early 1944. The motto quickly changed to “Get rid of the Luftwaffe!” We were turned loose to go down on the deck and strafe our way back home. We went looking for everything— boats, trucks, troops, flak towers and airfields—especially airfields.—Maj. Gen. Edward B. Giller, USAF (Ret.)

I was flying my third combat mission of the war as Tudor White 2 on a bomber escort mission near Boizenburg, Germany. I was flying a P-51 Mustang on the right wing of Group Commander Lt. Col. Elwyn Righetti, with two other Mustangs flying on his left wing. Our squadron was released from the bombers and we began to let down through the overcast and broke out at around 2,000 feet looking for targets of opportunity. Our section was about to go after some locomotives when Lt. Col. Righetti called out a gaggle of three Fw 190-Ju 88 bomber combos. We called them Mistels or Pick- a-Backs—an Fw 190 perched atop an explosive- packed pilotless Ju 88 flying bomb. From a distance, they resembled a swollen bomber to me.

The three of them were in a sloppy V formation at about 600 feet flying through the mist as Lt. Col. Righetti and I broke away and went after them while the other two Mustangs went after the trains. Lt. Col. Righetti went after the middle combo of the three Mistels and told me to take the third one. I put the proper wingspan in my ranging K-14 gunsight and cranked the handle around to get the correct piper size around the Ju 88. I began to fire and observed hits dancing around the left engine and wing root as the Ju 88 began to burn. As soon as my rounds impacted the Ju 88, the Fw 190 turned himself loose and pulled up fairly steeply. For a moment I thought he stalled out as he went into a left-hand turn.

To read more, click the link to open the PDF: Double Nickel Killers