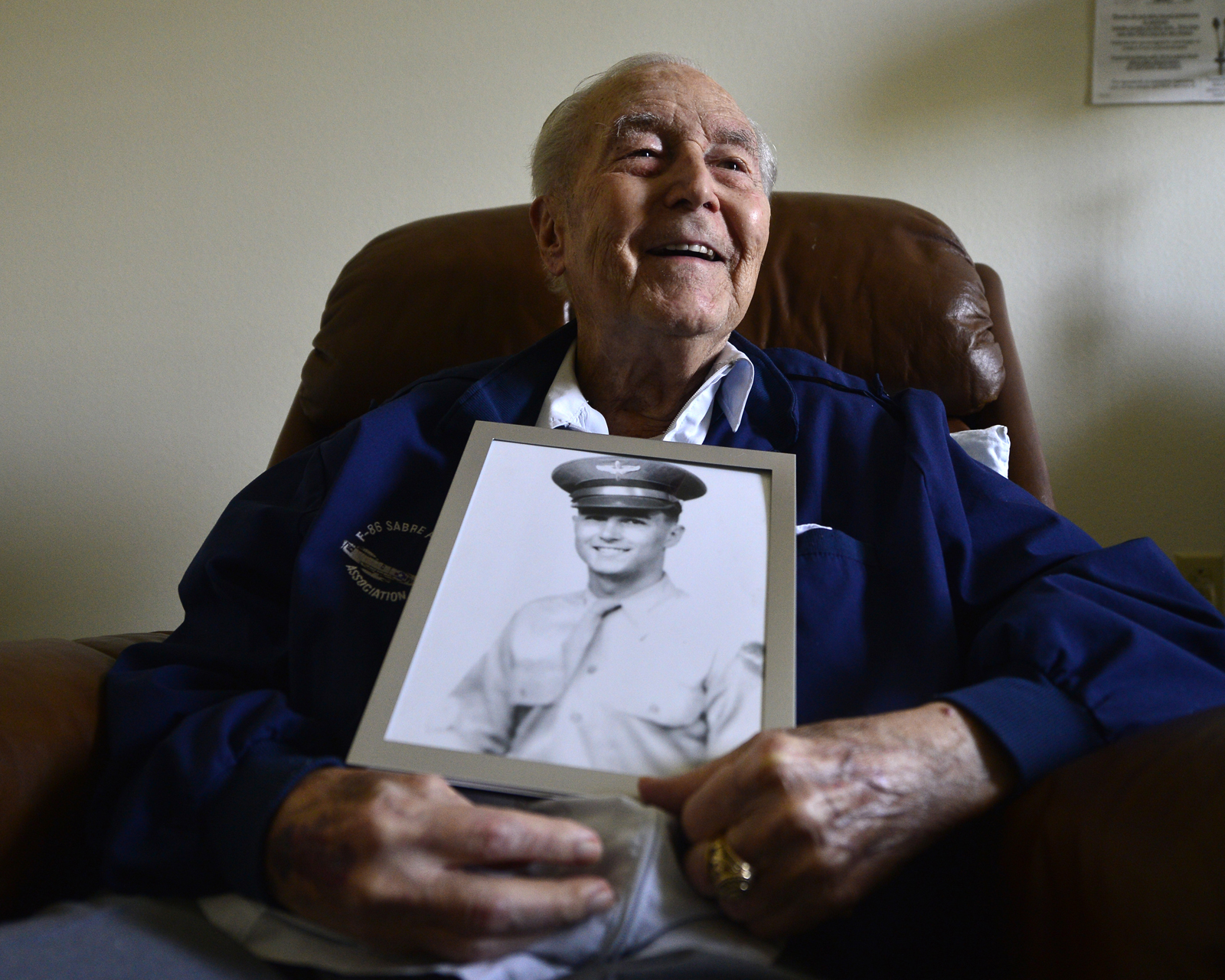 A glint of light in the sky above North Korea attracted the F-86 Sabre pilot’s attention, so he descended from 41,000 feet and saw four MiG-15s. But as then-Capt. Ralph S. Parr surveyed the rest of the sky, he realized he and his fellow pilots in Shark Flight actually were facing 16 enemy fighters.

The two MiGs Parr shot down on June 7, 1953, were the first of 10 kills in a seven-week period during the Korean War. Parr made double ace with his 10th kill on July 27, when he shot down a Soviet Ilyushin-12 cargo airplane on the last day of the war. He’s the only American pilot who has received both the Distinguished Service Cross and the Air Force Cross.

“You wind up either wanting to fight or not wanting to fight,” said 88-year-old Parr, now a retired colonel living in New Braunfels, Texas. “I made the decision I was going to fight to begin with. I didn’t think I could see anything up there that I thought would be able to take me.”

Parr joined the Army Air Forces and began pilot training in 1942 and flew the P-38 Lightning in the Philippines during World War II. When the war in Korea began, Parr was flying the F-86, but was reassigned to the 49th Fighter Group and the F-80 Shooting Star. After 165 combat missions, his experiences were beneficial as he helped to develop new combat tactics for fighting MiGs. Parr returned to action and the F-86 in May 1953 and became an ace with five kills in 11 days.

Retired Col. John Lowery, who flew under his command in Korea, described Parr’s plane when he returned to Kimpo Air Base after his first two kills in his book, “Life in the Wild Blue,” scheduled to be published in early fall. “At the time, all fighter-interceptor pilots instinctively checked the gun ports of returning flights for the dark gray soot, indicating their guns had been fired,” Lowery said. “This would imply contact with MiGs. And sure enough, the .50-caliber blast shields of one aircraft showed the unmistakable signs. The ship’s entire fuselage was very badly scorched from nose to tail, as if its paint had been singed with a giant blowtorch.”

On June 7, Shark Flight was on a fighter sweep to intercept and destroy any enemy planes over North Korea. After his F-86 left Kimpo AB, he flew north toward the Yalu River boundary with China, nicknamed “MiG Alley.” He was looking north toward China when he saw four MiGs with a 15-degree dive angle firing at them. After the initial confrontation, Parr looked down and saw a flicker across light-colored sand bars along the Yalu River shoreline. He rolled his plane down and leveled it at 300 hundred feet when he saw there were many more MiGs than he’d thought.

“As I closed rapidly to about 4,000 feet, I noticed there weren’t two, there were four, no, there were eight,” Parr said. “Then, off to my left, I saw eight more. Immediately, I decided to put a big notch in the MiG leader directly ahead.” He downed another MiG and damaged another and added another kill three days later. On June 18, he notched two more victories while protecting the fighter-bombers that were striking targets in North Korea, giving him five kills that made him an ace. He received the Distinguished Service Cross for a June 30 mission when he shot down two more MiGs and drove off two others that were attacking his wing commander.

Hours before the armistice on July 27, Parr was leading one of three flights of F-86Fs escorting a Marine photo-reconnaissance aircraft that was sent to photograph a dirt airfield in the Yalu River bed and saw an airplane flying close to the river on the Manchurian side. After he was cleared to investigate the plane, he saw it had the same red star as the MiGs and was flying over North Korean territory. Parr shot the plane down, which turned into a major international incident when the Soviets claimed it was a civilian airliner with a truce team on board 200 miles north in Manchuria. “I knew where it was and what it was,” Parr said. “The only thing I didn’t know was why it was there. I called our formation leader, and he said to take it, so I did. It almost hit the front page when it happened. Word got loose really fast that I’d shot down a truce team. Their side was serious, but so was ours.”

The Soviet Union filed a lawsuit against Parr in the International Court of Justice, although they later withdrew the suit, and shot down an RB-50 Superfortress over international waters two days later. None of the bomber’s crew ever returned, although most were presumed captured.

In Vietnam, Parr served two tours in Southeast Asia. He flew 226 combat missions as the 12th Tactical Fighter Wing’s deputy commander of operations, including a mission that earned him the Air Force Cross at Khe Sanh on March 19, 1968. Khe Sanh was located 7 miles from the Laotian border in the Bru Montagnard villages in northwest Quang Tri Province and was the government seat for the Huong Hoa district, Lowery said. It was the People’s Army of Vietnam’s major infiltration route to the south. Parr’s mission was to escort a large C-130 Hercules resupply effort to support the Marines and elements of the South Vietnamese Army. He faced severe weather and intense fire to support Marines. Despite being told several times by the Marine ground commander to abandon the mission because of the fire he was taking, Parr refused because of the damage the gun emplacements would cause to the C-130s, and he attacked in eight passes and destroyed eight North Vietnamese mortar and gun positions that were within 200 meters of the Marines. His F-4 Phantom II sustained 27 hits in the attack.

He returned to the 12th Fighter Wing twice, as deputy commander and commander, and flew 201 more combat missions during his second tour during the war. A back injury sustained while inspecting a roof for hurricane damage at Eglin Air Force Base, Fla., forced him to retire in 1976. During his career, he flew 641 combat missions with more than 6,000 hours and received more than 60 decorations, including a Silver Star, 10 Distinguished Flying Crosses and 41 Air Medals, all of which he attributes to his willingness to fight.