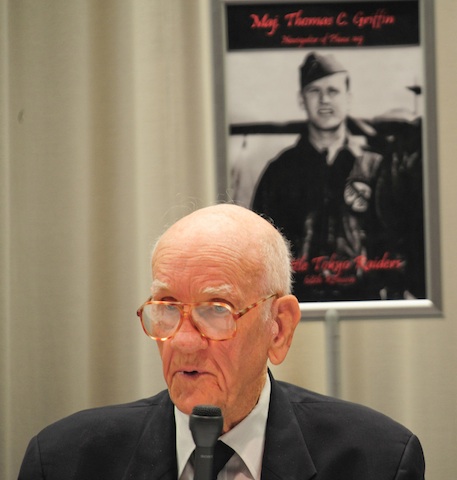 Now, he’s flying with the angels.

Tom Griffin, one of just five surviving Doolittle Raiders, died Tuesday night in his sleep at the Fort Thomas VA hospital in Kentucky. He navigated one of 16 North American B-25 Mitchell bombers from an aircraft carrier in the middle of the Pacific during the early dark days of World War II to launch a surprise daylight attack on Tokyo, lifting American morale. The longtime Green Township, Ohio, resident was 96.

By his own count, Mr. Griffin cheated death eight times during World War II. The first time was when he took off in a land-based bomber from the deck of the USS Hornet at 9 a.m. April 18, 1942. The mid-ocean takeoff made history. No land-based bomber had ever taken off from an aircraft carrier in combat. The Raiders made history later that day when they bombed Tokyo in partial payback for Japan’s Dec. 7, 1941, surprise attack on Pearl Harbor.

For the complete story by Cliff Radel of Cincinnati.com, click here.

Photo by the National Museum of the U.S. Air Force