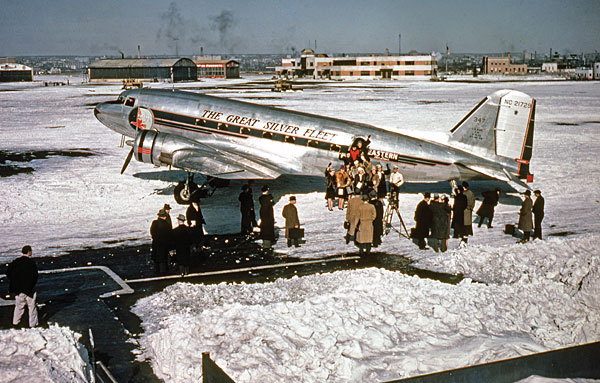 Everyone has a first flight: Mine was in a Gooney
Life is a million episodes stitched together to form a ragged continuum. However, regardless of how many episodes are involved, there is always the first one. This is especially true of those of us who have lived a sizeable portion of our lives in the air.

I’ve been an extremely active pilot for an amazing 57 years running up a total of around 7,500 hours in a wide variety of aircraft, glider to fighter, but there are two takeoffs that, in my mind, stand above all the others: my first real ride in an airplane and the day I soloed at 16 years old.

My first flight was in a venerable old DC-3, when I was around ten years old. I remember so clearly walking across the ramp in Lincoln, Nebraska, climbing up the short stairs to the rear door and walking uphill to my seat about a third of the way up the narrow fuselage. I remember the smell: a subtle combination of upholstery cleaner, av gas, hydraulic fluid and an aroma I’ll never forget and which still takes me back to that first flight every time I smell it. It was the smell of a still-hot radial engine. It affects the senses in a way that defies description because nothing else smells the same. Nothing!  I remember the way the gray upholstery with square doily-like white covers draped over the headrests felt. I remember climbing into my seat and scooting across to the window where I had a clear view of the left engine. It was as if I was a vibrating ball of sensors straining to take it all in and save it for eternity.

By that time in my life, like so many other pilots, I wasn’t just a ten-year-old-kid going for his first airline flight. I was an aviator-in-the-making with a long history in butchering balsa and trying to get little 1/2A gas motors to run long enough to get my models off the ground. Where the majority of the passengers were simply “there” in an unusual environment, I was where I’d dreamed I’d be almost from the moment I was able to form thoughts. I was in an airplane. A real live, ready-to-go airplane! Even at that age, I knew this was significant. It was right up there with the afternoon when my father showed me how to firmly plant the shotgun butt to my shoulder before pulling the trigger. When I pulled the trigger, another world opened up. And I clearly sensed this was about to happen again. And I wasn’t disappointed.

I can’t even guess how many radial engines I’ve sat behind and cranked into life, but none sang as sweet a song as those did. I counted the blades, as they came around, and could clearly feel when the mags were turned on. There were noticeable pulses through the airframe as the mixture caught and blue smoke started past me in shallow coughs. Then the coughing settled into that raspy purr that only round motors make.

I glanced over at my father. He was reading a magazine. My mother was fiddling with something. Neither were aware of the magical process that was under way. They were oblivious to the way an inanimate machine had suddenly come to life. I’m certain that if they had been studying me, they would have seen the transformation. They would have been aware of me stepping over a boundary into a new world. A world that would suck me in and forever be my home. They hadn’t really lost me, but from that moment on, they were going to have to share me with a bigger life.

When the power came up and the airplane started down the runway, electricity was flowing through my veins. Even as I type this, I can picture the view, and recapture the feeling, of the tail coming off the ground. It’s as if it happened 15 minutes ago. Then the rumbling stopped and the ground dropped away. In that instant, I saw the oh-so-familiar countryside from an entirely different perspective. And I haven’t been the same since.

As I think about it, I have yet to come down from that first flight. I don’t think any aviator does. Once you’ve been up, some people can never come down again. It’s a wondrously beautiful thing.