1 November 1954: The United States Air Force begins to retire the Boeing B-29 Superfortress from service. 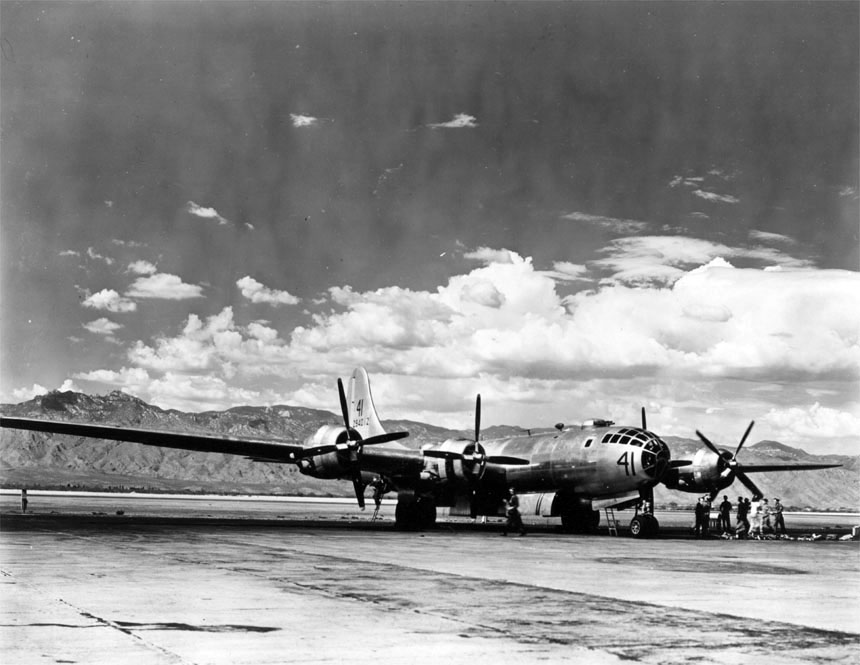 In the above photograph, B-29A-20-BN 42-94012 is at the aircraft storage facility, Davis-Monthan Air Force Base, Tucson, Arizona, “The Boneyard.” The dry desert climate and hard, alkaline soil make the base ideal for long-term aircraft storage. The Santa Catalina Mountains are in the background.

The B-29 Superfortress was the most technologically advanced—and complex—aircraft of World War II. It required the manufacturing capabilities of the entire nation to produce. Over 1,400,000 engineering man-hours had been required to design the prototypes.

The Superfortress was manufactured by Boeing at Seattle and Renton, Washington, and Wichita, Kansas; by the Glenn L. Martin Company at Omaha, Nebraska; and by Bell Aircraft Corporation, Marietta, Georgia.

There were three XB-29 prototypes, 14 YB-29 pre-production test aircraft, 2,513 B-29 Superfortresses, 1,119 B-29A, and 311 B-29B aircraft. The bomber served during World War II and the Korean War and continued in active U.S. service until 1960. In addition to its primary mission as a long range heavy bomber, the Superfortress also served as a photographic reconnaissance airplane, designated F-13, a weather recon airplane (WB-29), and a tanker (KB-29).

The Superfortress could carry a maximum of 20,000 pounds (9,072 kilograms) of bombs in two bomb bays. For defense it had 12 Browning M2 .50-caliber machine guns in four remote-controlled turrets and a manned tail position. The B-29 carried 500 rounds of ammunition per gun.

A number of B-29 Superfortresses are on display at locations around the world, but only two, the Commemorative Air Force’s B-29A-60-BN 44-62070, Fifi, and B-29-70-BW 44-69972, Doc, are airworthy. (After a lengthy restoration, Doc received its Federal Aviation Administration Special Airworthiness Certificate, 19 May 2016.)