The DH.4 entered service with the RFC in January 1917, first being used by Squadron 55. More squadrons were equipped with the type to increase the bombing capacity of the RFC, with two squadrons re-equipping in May, and a total of six squadrons by the end of the year. During late 1917, the uptake of the type by the RFC was accelerated due to a desire to launch retaliatory bombing raids upon Germany following such attacks having been conducted against the British mainland. 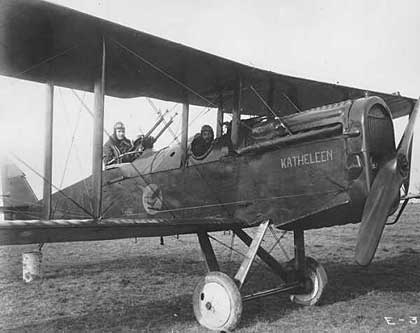 A drawback of the design was the distance between pilot and observer, as they were separated by the large main fuel tank. This made communication between the crew members difficult, especially in combat with enemy fighters. There was also some controversy (especially in American service) that this placement of the fuel tank was inherently unsafe. In fact, most contemporary aircraft were prone to catching fire in the air.The fire hazard was reduced, however, when the pressurized fuel system was replaced by one using wind-driven fuel pumps late in 1917, although this was not initially adopted by American-built aircraft.