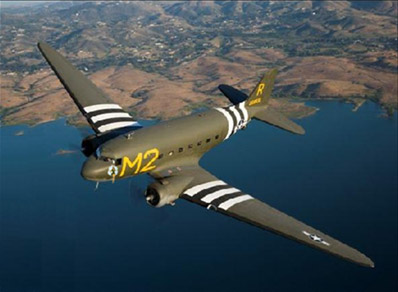 As the 70th anniversary of the Normandy invasion looms, an airplane that dropped paratroopers into that epic World War II battle will greet visitors at this week’s Riverside Air Show in California.

“Being able to sit in the seat that an 18-year-old (paratrooper) sat in 70 years ago, ready to jump (into combat), is kind of heady,” said Andy Conley, crew chief aboard the Douglas C-53D Skytrooper nicknamed “D-Day Doll.” “To smell the smell of an aircraft like that is unique: Oil and gas, and burlap and greasy rags. It’s (vintage) aviation.

For the complete story by Richard Brooks of The (Riverside) Press-Enterprise, click here.

Photo by the Inland Empire Wing of the Commemorative Air Force