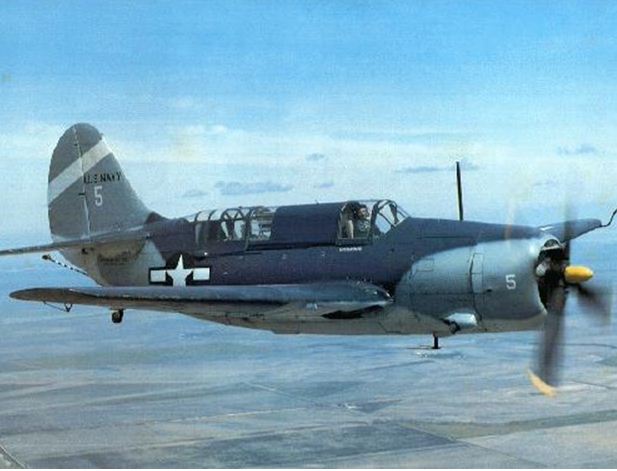 Randy Jordan went for a dive last week off the coast of Jupiter, Fla.-one of about 600 he does yearly as the owner of Emerald Charters, a scuba diving charter. A group of frightened fish led  Jordan to the discovery of  what might be a  Curtiss Helldiver SB2C, an extremely rare World War II aircraft submerged in 200 feet of water four miles at sea.

“I only take out good divers,” he says, and on this day he went on a dive with “tec divers”- technical divers who possess the advanced training and experience necessary to be eligible to travel beyond the 130 foot depth limit for recreational divers.

“We never go out to that particular area,” says Jordan of the space where the aircraft was found. “We don’t mark anything there,” Jordan says, “we fully expected to be diving in sand.”

A group of frightened fish tipped him off to the presence of the sunken aircraft. Jordan knew that something was strange, when the fish turned  right after spotting  him. When frightened, he says, fish normally swim directly with or directly against the current. “Swimming sideways of the current usually means they’re going somewhere,” he says.

Jordan followed the fish, where he discovered the aircraft.

Seeing its style of engine gave  Jordan a hint that there was something unusual about the aircraft. “That right there is from the 40s,” says Jordan, “There were some things that identified it immediately as a wreck of historical significance,” he says.

Jordan, who did not have any cameras on him when he first discovered the sunken aircraft, went back two days later to record video. He shared the video with The Warbird Information Exchange, an online forum for warplane buffs, and Kevin Knebel, a WWII buff who competitively builds and flies remote control aircraft.

The ratio of the wing size to the length of the fuselage, along with the engine type and landing gear led posters on the Warbird Information Exchange and Knebel to believe that the aircraft is most likely a Curtiss Helldiver SB2C, an extremely rare plane.

“There is only one left in the world that flies, and one on display in a museum,” Jordan says.

According to Knebel, the aircraft is a two-person plane, holding a  pilot and a bombardier. The plane carried bombs inside, making it fairly easy to identify. “There are only two [planes] of this kind,” says Knebel.  “The plane has a bomb bay with doors, and the doors would open and the bomb would come out from inside.”

The Curtiss Helldiver SB2C was first used in combat on November 11, 1943.  As previously reported by the Palm Beach Post, in 1942 the U.S Navy trained WWII pilots at Witham Field in Martin County, Fla. This may have something to do with how the aircraft ended up in the water.

“The aircraft is intact; it doesn’t look like [the crash] was violent,” says Knebel. “The crew was probably rescued,” he says.  “They knew what was coming.”

Because of the plane’s  possible historical significance, Jordan is only taking the most qualified divers to the site.  “It may be a grave site,” Jordan says of the spot where the plane was found.  “We are doing our best not to disturb it.”

The salvage of the plane is governed by the U.S.  Navy, but Jordan says, “if the Navy would allow me to, I would like to donate it to a museum and raise money to restore it.”On past dives, Jordan has found a lot of spear guns, fishing poles, and scuba equipment. He is excited to have a more interesting answer when people ask him what he’s found. “Now, I can absolutely answer that right away. This is definitely the most interesting thing I’ve seen underwater.”