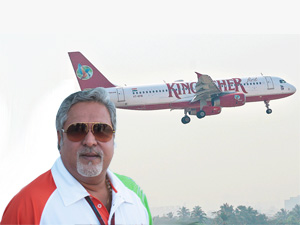 An Indian court Friday ordered the arrest of the highflying owner of Kingfisher Airlines for bouncing checks, adding to the beleaguered airline’s woes as its struggles to resume flights that have been grounded since the start of the month.

The cash-strapped airline has stopped selling tickets on its website through Oct. 20 and is still trying to convince pilots and engineers who haven’t been paid for months to return to work. The airline had promised to resume flights on Friday.

A court in the southern city of Hyderabad issued an arrest warrant for Vijay Mallya on charges his airline bounced four checks worth over 103 million rupees ($1.9 million) to the consortium running the airport in the city. The money was meant to cover landing, parking and navigation fees at the airport.

Kingfisher can approach a higher court for a temporary stay on the arrest warrant and it’s unlikely that Mallya faces immediate arrest. But it wasn’t clear what his next move would be and several calls to a spokesman for the airline went unanswered.

The industrialist is famous for his flashy lifestyle and lavish parties attended by fashion models, Bollywood movie stars and cricket players. Mallya’s United Brewery Group is India’s largest brewer and owns other businesses in industries from chemicals to information technology. He also owns Force India – an F1 team and Royal Challengers, a cricket team that plays in the Indian Premier League. Mallya’s net worth is $1 billion, according to Forbes.

Kingfisher, once one of India’s best airlines, is now battling for a lifeline with India’s airline regulator, which has asked the company to explain why its license shouldn’t be revoked. The company is also drowning in debt.