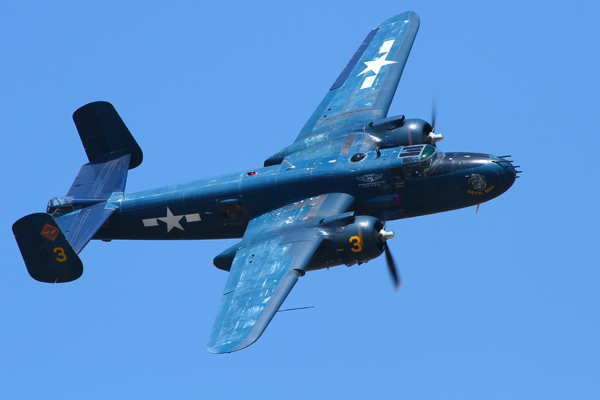 A celebration honoring those who fought for our freedom will be held this Memorial Day, May 27, by the Commemorative Air Force (CAF) at its Midland (Texas) International Airport base. The event begins 11 a.m. where families can see the North American B-25 Mitchell Devil Dog and enjoy traditional ceremonies, Open Cockpit Day, and free admission to the CAF Airpower Museum.

The event, held annually, also will include a flag ceremony, the induction of eight of the Texas Medal of Honor recipients, a flyover by vintage CAF aircraft and special guest speaker retired U.S. Army Major Gen. Patrick H. Brady, who will share his reflections on Memorial Day. Brady will conduct a free seminar in the Commemorative Center Hangar about his experiences as a helicopter pilot in the Vietnam War. During his two tours in Vietnam, he flew over 2,000 combat missions and evacuated more than 5,000 wounded. After Vietnam, Brady continued serving in the Army, retiring as a major general in 1993 after 34 years of service during which he received the United States military’s highest decoration, the Medal of Honor.

Following the ceremonies, the CAF’s B-25 Devil Dog will be selling rides. Devil Dog represents a PBJ, a U.S. Marine Corps version of a B-25, and features eight .50-caliber machine guns on the nose. Don’t miss this chance to take a ride on this amazing World War II aircraft!

Other activities include face painting with Greenie the Clown, balloon fun with Harlan the Balloon Guy and a petting zoo provided by the local 4H Club. During Open Cockpit Day, 12:15 p.m. to 3:00 p.m., adults and children alike can climb inside authentic warbirds and get an idea of what the men and women of our American Military may have felt as they flew missions to protect our freedoms. Also on display at the CAF, enjoy a unique array of privately owned classic cars from area collectors.

Lunch can be purchased in the Commemorative Center hangar starting at 12:15 p.m. for $10 per plate. Those who buy a lunch ticket will be entered into a drawing to win a warbird ride. Kona Ice treats and drinks will also be available for purchase.