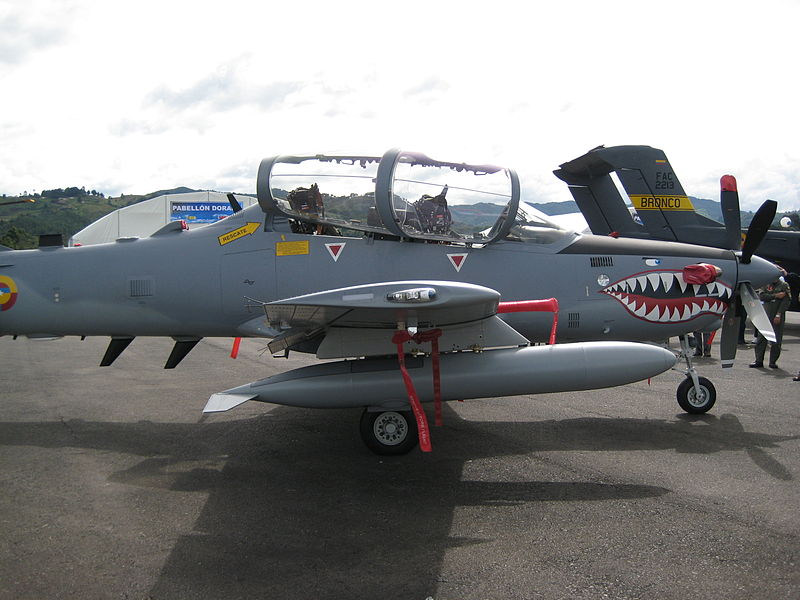 Editor’s note: This story was written by Col. Maria Cecilia Silva Velasquez of the Fuerza Aérea Colombiana (Colombian Air Force) and provides a fascinating look at how one South American county participated in a military training exercise thousands of miles away.

For the first time ever, the Colombian Air Force is participating in one of the greatest international operational training exercises, Exercise Maple Flag, which ends June 21 at Royal Canadian Air Force 4 Wing Cold Lake in Alberta.

Altogether, we brought six Embraer EMB A-29 Super Tucano combat aircraft, a Lockheed C-130 Hercules transport aircraft and a Boeing KC-767 refuelling aircraft to the exercise. This journey began on May 12 when the Super Tucanos and the Hercules, with support personnel on board, took off from Barranquilla, Colombia, for a three-day, 20-hour, 4,163-mile journey from Colombia through Kingston, Jamaica; Homestead, Fla.; Maxwell, Ala.; Scott, Ill.; Sioux Falls and Regina, Canada, to finally arrive in Cold Lake.

The FAC was invited to attend Exercise Maple Flag as an observer nation in 2012. With commitment and responsibility, FAC Commander Gen. Tito Saul Pinilla Pinilla accepted the invitation to underscore the FAC’s interest in developing a strategic vision, supported by increased levels of training related to combined operations, and with the goal of standardizing our procedures in accordance with NATO doctrine.

To achieve that goal, Colombian crews have performed three large force employment exercises during the last eights months, involving most of the fighter squadrons in Colombia, supported by air-air refuelling aircraft such as the KC-767 and Boeing KC-137 and transport aircraft such as the C-130 and EADS CASA C-295. The entire exercises were conducted in English so that the crews would be better prepared for success in Maple Flag 46, thus maintaining the good will and outstanding performance demonstrated previously at the U.S. Air Force’s Exercise Red Flag, which we participated in last year.

The Colombian Air Force was created in 1919 and it is characterized as a 24/7 operating force due to the constant internal conflict in the country. That is why the Colombian crews have reached [generally speaking] the highest levels of training and experience in counter-insurgency operations to fulfill its mission statement: “To exercise and maintain airspace control, to conduct operations and defend the sovereignty, independence, territorial integrity, national constitutional order and the state’s purpose achievement.”

For example, knowing the growing trend in precision attacks and night combat missions using night vision goggles (NVG), the FAC commander decided to increase the attack capabilities of the force by choosing the A-29 Super Tucano as a completely new NVG-compatible player in the conflict.

This turbo-propeller, single-engine, two-seater aircraft is designed to accomplish attack, air patrol, combat, close air support and air interdiction missions with a range of up to 534 miles with the use of external tanks. Simultaneously, the Super Tucano is employed for advanced training at its home base, the 2nd Air Combat Command (CACOM-2), which is one of 15 air bases spread all over the country.

CACOM 2 is located near by Villavicencio City, in the eastern part of Colombia, where the A-29 has been responsible of several of the most important strikes to narco-terrorist structures, making this base the most operationally busy one in Latin America.

The Colombian team would not be complete without the tanker; ours is a modified Boeing 767-200ER as a multi-mission tanker transport which, among its multiple capabilities, performs air-to-air refueling with the IAI Kfir [a fighter aircraft] and Cessna A-37B [light attack] aircraft. This kind of procedure allows aircraft to considerably extend their range and/or endurance requirement for a given situation to support any allied country with one objective: to protect friendly forces and get the mission accomplished.

In 2012, NATO unanimously voted for Colombia to be included in the NATO doctrine publication, ATP-56 AAR, as an allied nation, making the Colombian Air Force eligible to participate in air refueling interoperability agreements with any NATO members and its allies.

During the first week of Maple Flag at 4 Wing, the tanker was able to perform its first connection with a NATO McDonnell Douglas CF-18 Hornet as part of the RCAF fighter pilot training, in accordance with all the protocol, rules and safety procedures required to confirm the Colombian Air Force interoperability in order to become the first Latin American force to execute this kind of operation with the RCAF.

The C-130 Hercules aircraft, belonging to 811 Squadron from the Military Heavy Air Transport Command (CATAM), is responsible for all military tactics airlift operations and special transport operations such as troop infiltration and parachute cargo drop under enemy threat environment, most of the time using NVG.

The 120-person Colombian team is composed of military pilots, navigators, ground crew, air defence officers, maintenance officers, logistic personnel, security and base defense personnel who have been chosen to participate in this exercise for knowing what they are doing and most important, for being the best at it, all of them led by the CACOM-2 commander, Brigadier-General Pedro Ignacio Lozano Quinche.

Thanks to their joint effort, all of the Colombian aircraft and their crews are having this great opportunity to share interoperability scenarios with allied countries and to show the world Colombian professionalism and high capacities that have led them to become a regional and global benchmark.