The Classic C-46 Commando was originally marketed by the Curtiss-Wright Corporation as a pressurized 20-passenger “sub-stratosphere transport” for the masses but earned its stripes doing heavy lifting in WW II.

Curtiss-Wright Corporation designed and built its proposed CW-20T twin-engine passenger airliner as an advanced higher-flying, larger-capacity alternative to the Douglas DC-3. The CW-20 was designed by chief engineer George A. Page, Jr. in 1937 with a full-scale wooden mockup. The entire left side of the mockup was omitted to show the cockpit and passenger cabin seating arrangements. A number of airlines showed interest in the CW-20T design, and some 25 letters of intent were signed but no orders were forthcoming. 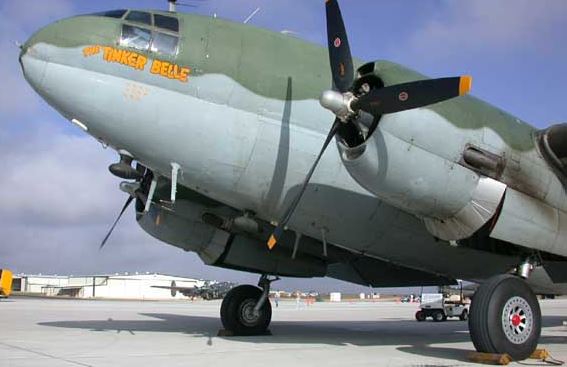 The CW-20T prototype rolled out of the factory in February 1940 to be prepared for flight testing. The prototype was the largest and heaviest twin-engine transport in the world at the time, powered by a pair of 1,600-horsepower Wright air-cooled R-2600 Cyclone radial engines. A successful first flight out of Lambert Field was completed on March 26, 1940. Its pilot was the legendary Edmund Turney “Eddie” Allen who also made the first flights on the Lockheed Constellation and Boeing Superfortress among numerous other classic aircraft. Allen’s copilot was Dean Cullen Smith who was in management with American Airlines at the time, and who had piloted the Ford trimotor during the Byrd Expedition to the South Pole during the 1928-1930 period.

The CW-20T prototype (civil registration NX19436) featured a twin-tailed design with a pair of small vertical stabilizers and rudders at either end of its horizontal stabilizer. It was publicly announced on April 11, 1940 as the “Sub-Stratosphere Transport.” Eddie Allen, a highly respected and sought-after freelance engineering test pilot, indicated that a third tail on centerline or a single tail with more area would be best for the airplane. Therefore, its twin-tailed empennage was replaced with a single tail and its overall stability at low speeds was much improved.

Thus the one-of-a-kind twin-tailed CW-20T (the T suffix meaning Transport) was converted to the single-tail CW-20A and was procured by the USAAC as the C-55-CS for evaluation.

Air Corps commander Henry H. “Hap” Arnold took the closest look at the C-55 airplane in mid-1941, and by his request it was ordered into production on a limited basis at first but in larger numbers soon after. In the interim, the C-55 designation had reverted to C-46 and the type was officially named Commando. In actuality, it was the C-55 that served as the prototype for the C-46 as no XC-46 was built.

On the 13th of September 1940, the AAC approved contract number AC15785 for 46 CW-20Bs (25 C-46-CUs and 21 C-46A-1-CUs) to be built at the Buffalo, New York, Division of the Curtiss-Wright Corporation. The initial order for the type was followed by numerous others to total 3,181 Commandos — far less than its twin-engine rival, the Douglas C-47 Skytrain — but it was a significant amount nonetheless. They were all manufactured in Buffalo and St. Louis — the first C-46-CU example (USAAF serial number 41-5159) rolled out in Buffalo on July 10, 1942, was delivered two days later, and made its first flight shortly thereafter.

To summarize, the Curtiss C-46 Commando was extensively used in the China-Burma-India Theater of Operations in World War II  — famed for the thousands of deliveries of cargo they made while flying dangerous missions over “The Hump” between India and China. The U.S. Navy procured 160 Commandos for use by the U.S. Marine Corps, designated R5C-1. The C-46 also served in the Korean War and for a short time in the Vietnam War before it was retired in 1968.