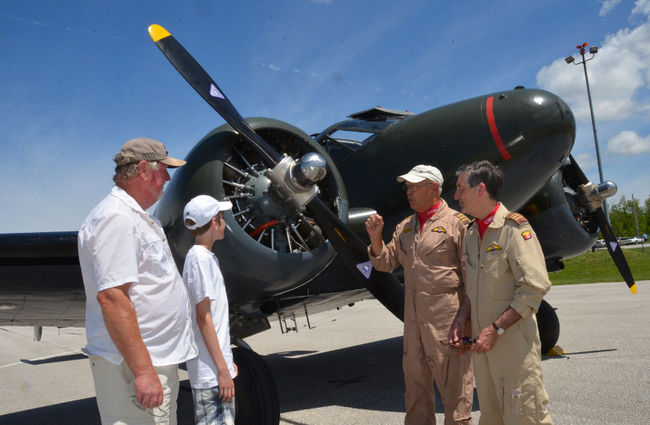 Jackson Wit took a short trip back in time at the Owen Sound Billy Bishop Regional Airport in Ontario, Canada, on Sunday.

The 13-year-old took a flight in a Beech 18 that dates from the 1940s that was offering tours at the fifth annual Wings and Wheels put on by the Owen Sound Rotary Club and the Canadian Owners and Pilots Association Local Flight 144.

“I imagined a bit that I was going back in time,” Wit said shortly after landing after taking a flight with his grandfather Al Shaw. “I have flown on a jet on vacation a couple of times and a helicopter once, but this was really different because it was an old plane.”

Wit said the plane was louder than what he was used to in his other flight experiences, but the ride was smooth.

“it was neat and a lot of fun because the plane was so old and I wasn’t sure they still had planes that old that could easily fly around,” said Wit. The 1946 aircraft was visiting Owen Sound from the Canadian Warplane Heritage Museum in Hamilton along with a World War II North American B-25 Mitchell bomber.

For the complete story by Rob Gowan of the (Owen Sound) Sun Times, click here.