1960 – During the Cold War, the United States was desperate for timely, accurate intelligence on Russian military activities. While that sort of information is gained by powerful satellites today, space-based reconnaissance was in its infancy in the 1960s. Not only was it unreliable, it was also not at all timely, since film had to be ejected from the orbiting satellites and returned to Earth for pickup, usually snatched from the air as they descended by parachute. It was not a foolproof system, and many rolls of film were lost. Low level American reconnaissance planes had been probing the edges of the Soviet Union, but it was hazardous duty and many planes and pilots were lost to Russian fighters. 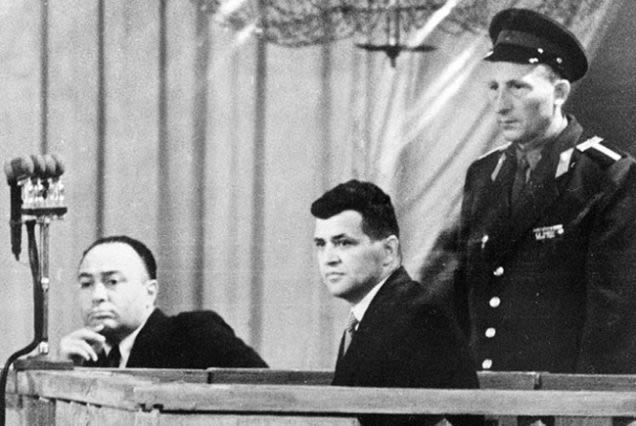 (Left: CIA pilot Powers on trial in the Soviet Union.)

With the new Lockheed U-2, Kelly Johnson and his team of engineers produced an aircraft that was capable of flying at 70,000 feet and, though the “Dragon Lady” was by no means a fast aircraft, its extreme operating altitude made it immune to interception by enemy fighters of the day. But as Soviet antiaircraft missile technology improved, it was just a matter of time before a U-2 pilot would be shot down.

The inevitable occurred on May 1, 1960, when CIA pilot Francis Gary Powers was shot down while on a spy mission over Russia. Powers took off from Pakistan and flew northward to photograph ICBM sites at the Baikonur Cosmodrome and the Plesetsk Cosmodrome. After photographing the sites, his flight plan dictated that he continue north and land in Norway. By now, these reconnaissance flights had become somewhat routine, and Powers was flying a predictable route. Soon after entering Soviet airspace north of Kazakhstan, his aircraft was detected near Chelyabinsk and fighters were sent to intercept it. Despite their best efforts, the fighters were unable to reach the spy plane at its extreme altitude. Next, the Soviets launched eight SA-2 Guideline missiles at Powers. One of the missiles destroyed at least one of the fighters sent to intercept Powers, but another detonated directly behind the U-2, showering it with shrapnel. With his aircraft damaged, Powers ejected, but the plane came to earth relatively intact. He was captured, but chose not to take the poison capsule that the CIA provided him with, though its use was optional.

At first, the US denied that Powers was on a spy mission. They explained that the unmarked U-2 was a weather plane that had accidentally flown off course. As part of the cover up, NASA released a detailed account to the media of how one of its research planes had flown off course, and other U-2s were hastily painted with NASA markings to lend credibility to the ruse. But the Soviets were not fooled, and the incident dealt another blow to already-brittle US-Soviet relations. Despite American attempts at obfuscation, the Eisenhower administration was forced to admit the true nature of the flight, and Powers pled guilty at what was essentially a propaganda show trial. He was convicted of espionage and received a sentence of ten years in prison, including seven years of hard labor. Ultimately, Powers served only 21 months of his sentence and, on February 10, 1962, he was exchanged for KGB spy Rudolf Abel, who had been convicted for espionage in what was known as the Hollow Nickel Case. 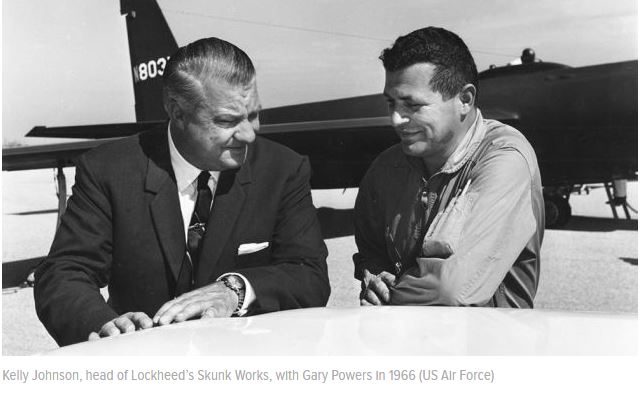 Following the incident, the US halted flights over the Soviet Union and accelerated its work on satellite reconnaissance. But the true legacy of the Powers incident was the CIA’s Oxcart program, which saw the development of the Lockheed A-12 and Lockheed SR-71 Blackbird, aircraft whose combination of extreme altitude and Mach 3 speed made them capable of flying over enemy territory with complete impunity. Powers returned to the US and worked as a test pilot for Lockheed, though he remained on the CIA payroll. After leaving Lockheed, Powers worked as a helicopter pilot for a Los Angeles television station, and died in 1977 when his Bell 206 JetRanger ran out of fuel and crashed while covering a news story.