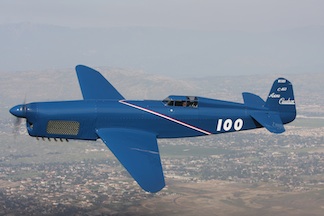 Powered by a 456 cubic inch, inline, air-cooled Renault six-cylinder with a two-position prop (it shifted into a coarse pitch automatically as the speed built up) the long, lean lines of the Caudron said things were about to change in Cleveland. And they did: the airplane walked away with the Greve trophy, besting the second-place aircraft by 25mph. Then, even though it had less than half the displacement and power as the other aircraft, it went after the Thompson trophy. And it won. And that was the last time the aircraft was seen on American soil. It went back to France and stayed there. But, that didn’t mean it wouldn’t be remembered.

For the past 20 years, the U.S. has seen a sub-culture develop in which race airplanes of the 1930s have become such cult objects that virtually every one of them has been faithfully replicated. Except the Caudron C.460. So, Mark Lightsey, whose company Aerocraftsman in Riverside, Calif., has restored and built a large number of aircraft, decided it was time someone built one.

Starting with nothing but photos and old model airplane plans, Lightsey used comparative geometry on the photos to verify the model drawings’ accuracy. Then he took his knowledge of wood aircraft construction and went to work. The Renault engine was not to be found so they used a current-production, super charged six-cylinder, Czech-built LOM. The aircraft has been flying for over four years and showing aviation enthusiasts on both sides of the pond what a serious race airplane actually looks like.