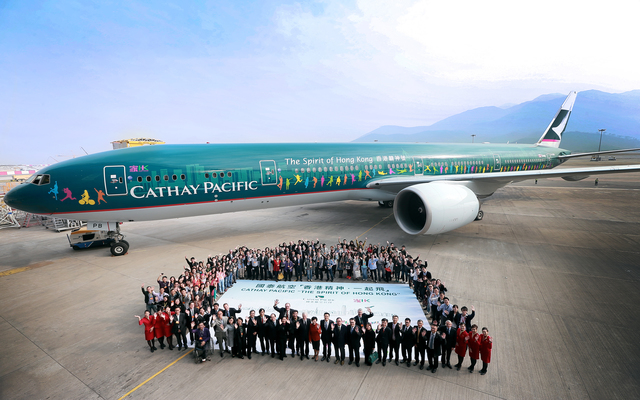 Cathay Pacific Chief Executive John Slosar officiated at the livery unveiling ceremony, held in the hangars of the Hong Kong Aircraft Engineering Co. More than 200 other guests, including government officials, aviation partners, campaign winners and their friends and relatives, were in attendance.

The livery design, painted onto one of the airline’s Boeing 777-300ER aircraft, carries the silhouettes of the 110 “The Spirit of Hong Kong” winners. The campaign was launched by the airline in July in support of the Hong Kong SAR Government’s own “Hong Kong: Our Home” campaign, and called on Hong Kong people to submit creative entries that illustrated the true spirit of the city.

The contest attracted an overwhelming response from the public, with more than 5,000 high-quality entries received, all of which demonstrated the true spirit of Hong Kong and what the city means to the contestants.

“We launched ‘The Spirit of Hong Kong’ campaign to encourage people to share what makes them proud of their home city and to promote this city’s extraordinary spirit,” Slosar said. “Having had such a great response to the campaign, we are now excited to be able to highlight that spirit through this unique livery. Our third ‘Spirit of Hong Kong’ aircraft will fly around our global network, helping to highlight the qualities that make this city so special.

“Cathay Pacific has been the home carrier of Hong Kong since 1946. For six decades we have been growing together with Hong Kong, supporting the city and its people every step of the way. We will continue to uphold the Hong Kong spirit, support our home, and infuse the city with positive energy as we move forward together,” Mr Slosar added.

“The Spirit of Hong Kong” campaign called for entries that best represented the spirit of Hong Kong in terms of the relevance of the message, the ability to inspire, creativity and presentation quality. Two-hundred weekly winners were selected by public voting, while a judging panel separately selected 100 Top Winners and 10 Champions. A total of 620 round-trip tickets were given to the winners to enjoy trips to destinations around the networks of Cathay Pacific and sister airline Dragonair.

Cathay Pacific began highlighting the spirit of its home city in 1997, when the airline created a special livery for one of its aircraft that showcased the Hong Kong skyline in celebration of the transfer of sovereignty. In 2000, the airline unveiled its second “Spirit of Hong Kong” aircraft, created through a livery design competition, that highlighted the resilience of Hong Kong and urged people to come together to overcome the challenges the city faced.

The latest “Spirit of Hong Kong” aircraft was set to begin its mission soon after the unveiling ceremony, carrying silhouettes of 110 of the city’s people to destinations around the world.

Story and photo by Cathay Pacific