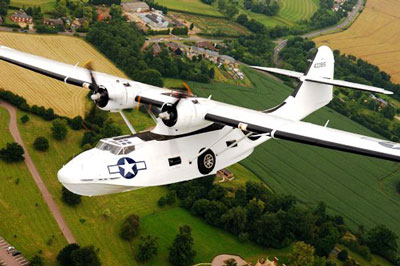 A 70-year-old amphibious aircraft flew along the River Thames on Wednesday morning as it set off to trace the route of the 1913 Circuit of Britain Race.

PBY Catalina G-PBYA, operated by Plane Sailing Air Displays Ltd. and built in Canada in the 1940s, took off from its base at IWM Duxford on Wednesday morning to tour the U.K. to mark the centenary of the 1913 Circuit of Britain flight, which was flown by pilot Harry Hawker and mechanic Harry Kauper, both Australians, in a Sopwith Waterplane.

The Catalina, known in the Royal Canadian Air Force as a Canso A, celebrates its 70th birthday this month, making it the oldest UK-based airworthy amphibian. The Circuit of Britain Race was the first major British competition for seaplanes. It was supported by Lord Northcliffe, the proprietor of the Daily Mail, who was a great fan of aviation races.

For the complete story by London SE1, click here.