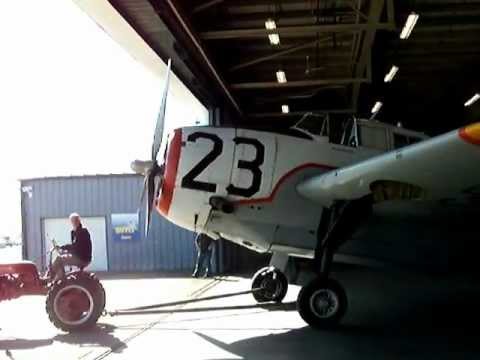 The Shearwater Aviation Museum in Shearwater, Nova Scotia, unveiled its latest exhibit Thursday in Canada. It’s a vintage torpedo bomber, one that used to bomb forests in New Brunswick with water.

It’s the last of the Grumman TBM Avenger aircraft. They were originally built as torpedo bombers, but converted by the Royal Canadian Navy for anti-submarine warfare. Twelve of them were eventually sold to Forest Protection Limited in New Brunswick, where they were used in the 1960′s and 70′s to spray forests for bugs and fight forest fires.

Last year the Shearwater Aviation Museum foundation bought the last of the airplanes back, and returned it to it’s original look as a navy plane. “Their work today will leave a beautiful exhibit in the museum for years to come,” says Christine Hines, the Curator at the museum. She adds, “It’s a lasting legacy to our visitors to understand the role of the Royal Canadian Navy, the work of anti-submarine warfare and to create a link – a bridge – to the serving members.”

For video and the complete story by Ray Bradshaw of Global News (Canada), click here.