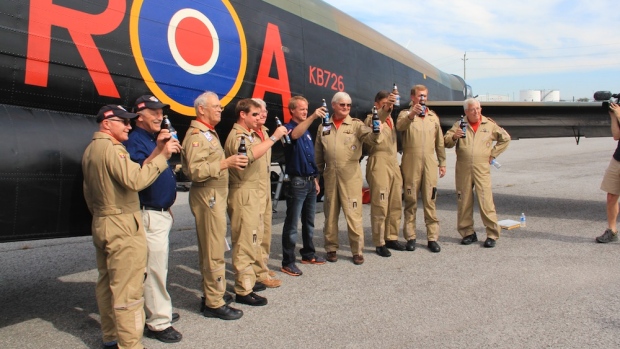 Her entrance was unmistakable.

Hamilton’s Avro Lancaster bomber, nicknamed Vera because of its flight initials, VRA, displayed on the fuselage, swooped from behind the Canadian Warplane Heritage Museum in Ontario right at noon Sunday to signal she was home. Hundreds of people gathered for the plane’s homecoming whooped and cheered, eager for the 1940s-era bomber to be home after a seven-week trip to the U.K.

“It sounded like a bridge too far when we first started talking about it,” said museum CEO and today’s pilot, David Rohrer. “Challenges logistically, financially, the weather, accommodations, the team we needed to put together — it sounded like it might be too big a project for us. But in true Canadian style, here we are!”

For the complete story by Kelly Bennett of CBC News, click here.

Photo by Michael Cole of CBC