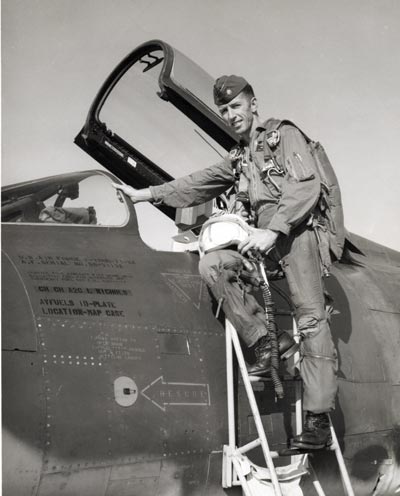 Warren H. Rice flew “every airplane in the book, or at least every airplane that mattered,” in a career that began during World War II and continued through the Korean War and Vietnam, collecting two Distinguished Flying Crosses (DFC) along the way.

Rice was awarded his wings at Williams Army Airfield in Mesa, Ariz., when he was 18, reportedly soloing after just four flight hours. He was sent to fly the Lockheed P-38 Lightning fighter in the South Pacific, during the height of World War II. Later, he would fly jets like the North American F-86 Sabre over Korea and then 228 missions in the North American F-100 SuperSabre during the Vietnam Conflict.

He was known for a unique – and dangerous – technique for taking out anti-aircraft guns during his time in Vietnam: Rice would dive directly at the guns firing at him. It worked, and the enlisted men in his squadron presented him with a large wooden plaque proclaiming him “the greatest gun-killer in Vietnam.”

For the complete story by Scott Orr of The (Prescott, Ariz.) Daily Courier, click here.

Photo via The Daily Courier