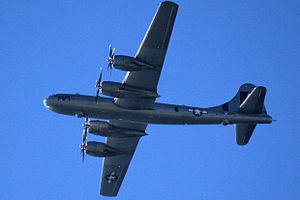 The Commemorative Air Force’s (CAF) famous Boeing B-29 Superfortress bomber FIFI – the only remaining flying example of the aircraft in the world – will be the feature World War II airplane in their summer tour that includes more than 20 stops starting May 15 in Birmingham, Ala. The CAF AirPower History Tour continues through October and will feature a different combination of historic World War II aircraft at each of its stops across the Eastern and Midwest U.S.

Other historic military aircraft joining FIFI at different tour stops will include the Consolidated B-24 Liberator “Diamond Lil,” the famous combat veteran North American P-51 Mustang “The Brat III” and other WWII fighters and trainers.

The B-29 Superfortress, first flown in 1942, began active service in 1944 and is perhaps best known as the aircraft whose missions over Japan helped bring about the end of World War II. It was designed as a replacement for the older Boeing B-17 Flying Fortresses and B-24s, with longer range and greater bomb loads. The B-29 also was used in the Korean War in the early 1950s and was a staple of the U.S. Air Force until the late 1950s.

The tour is excited to announce the addition of another significant historic airplane. Pilot Sarah Wilson and her Jimmie Allen Flying Club Speedmail will be traveling with the tour for many of the stops. This 1929 airplane is the oldest surviving Stearman Model 4 Speedmail and is a real-life celebrity vehicle. Originally delivered to the Richfield Oil Co. on Oct. 28, 1929, this plane was the flagship for the Jimmie Allen Flying Club based on the popular radio program The Air Adventures of Jimmie Allen. The radio series and flying club were important tools and greatly influenced the generation that would fly in WWII.

Events are open to the public and will allow attendees to get up close to these famous aircraft. Cockpit tours of the B-29 and others will be available when the aircraft are not in motion. There will be opportunities for attendees to purchase a ride in many of the airplanes at all of the stops. Ride reservations are recommended.

Birmingham, Ala., May 16-19, Birmingham International Airport