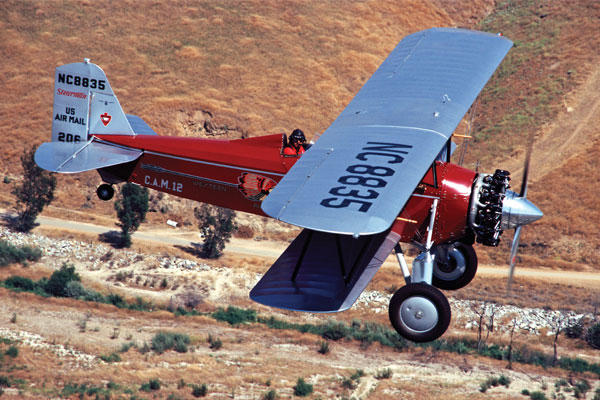 When the name Stearman is mentioned in aviation circles, the first thought that comes to mind is of the popular World War II PT-13, PT-17 and N2S biplane military primary training planes that introduced thousands of military pilots to flying. However, for the most part, those airplanes were actually Boeing Model 75 Kaydets.

The Stearman Aircraft Company was founded by Lloyd Stearman at Venice, California, in 1927 and then re-organized a year later in Wichita, Kansas. However, in 1934, the Stearman Aircraft Company became a subsidiary of the Boeing Airplane Company, and in 1939 it became known as the Wichita Division of the Boeing Airplane Company. Thus, the Stearman Model 75 which first flew in 1936, eventually became the Boeing PT-13/PT-17/N2S Kaydet. With over 10,000 being manufactured, the Kaydet was probably the most widely produced biplane in the world.

However, overshadowed by its famous descendant, the very first Stearman airplane to receive a type certificate was the Model C3. A development of the Model C-2 (only four C1 and C2s were built in Venice, California), with a bigger oil tank and baggage compartment, the C3 flew for the first time in 1927. Altogether, 15 different variants of the Stearman Model C3 were built. But, with a grand total of only 179 being manufactured, it is obvious why the C3 was overshadowed by the Model 75.

One of the few Stearman Model C3s flying today is the C3B restored by Ron Alexander. Carrying the registration NC8835, it was manufactured in 1928 as Stearman serial number 241. An unequal span sport/commercial biplane with tandem cockpits for a pilot in the rear and two passengers seated side-by-side in the front, the C3B was powered by a 220-horsepower Wright J-5 Whirlwind radial engine. A later development, the Model C3MB was a special mail-carrying variant with the front cockpit enclosed as a cargo compartment. 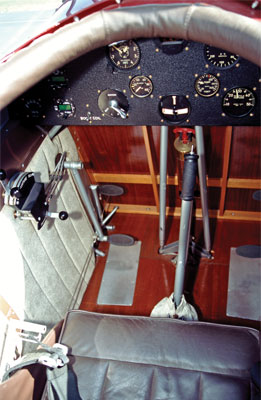 Above: The Alexander C3B was restored to be as authentic as possible while still maintaining the ability to be flown regularly. Below: The two-small-people-wide front seats was, at one time, the residence of a crop-duster hopper, when NX8835 was working for a living. 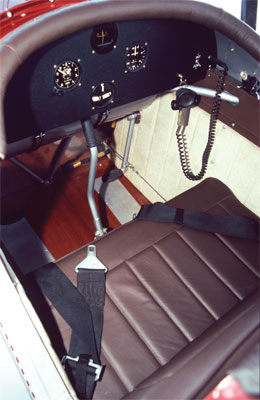 Eventually, number 241 wound up as a crop-duster before being restored with a 220hp Continental engine in 1983. While the restoration wasn’t even close to his standards, Ron Alexander did purchase the airplane and flew it for about a year, though it was reportedly tail-heavy and underpowered. Subsequently, Alexander, a partner in the Poly-Fiber Aircraft Coatings firm based at the Flabob Airport in Rubidoux, California, hired Brian Newman to run Poly-Fiber’s restoration shop known as the Flabob Aeroplane Company. 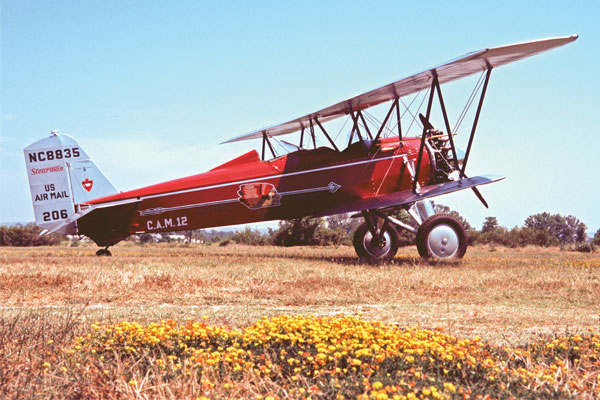 Above: A grass field and a big old biplane: what better way to represent pioneer aviation in America? The mailplane versions of the C3 Stearman lived a hard life that often had a disastrous ending.

After two and a half years of work, Newman, with help from several part-time workers, turned “a real bucket of bolts” into a stunning restoration of Lloyd Stearman’s first production model airplane. To provide more power, a 300hp Lycoming radial engine was rebuilt for the project by Don Sanders of Sanders Aeromotive in Mustang, Oklahoma, and mated to a Hamilton Standard 2B20-9 constant speed propeller. Red Line disc brakes replaced the Stearman’s original mechanical brakes and a late model Stearman tailwheel was substituted for the original C3B tailskid. Two new propeller spinners (one as a spare) were spun for the airplane by Lefty McGuckian at Chino, California, and, naturally, the fabric covering and paint for the project came from the Poly- Fiber stocks. Finished in U.S. Air Mail colors and markings, the lettering and Indian-head insignia were handpainted by Louie Check. 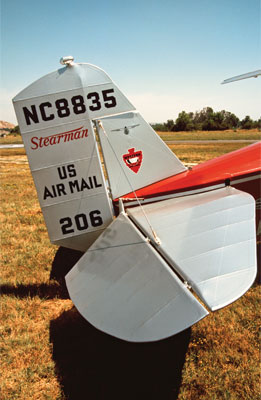 Above: The big rudder and smallish vertical fin gave the C3B Stearman a better chance of surviving crosswinds than many of its peers.

Brain Newman made the first post-restoration test flight of the C3B in May 2004 and says that: “It flies nice for a 1928 airplane, but is a bit heavy on the ailerons. It has a good rate of climb and is a little speedster, but blind as a bat. You need a good memory for landings. Three-point landings are the way to go with this airplane.”