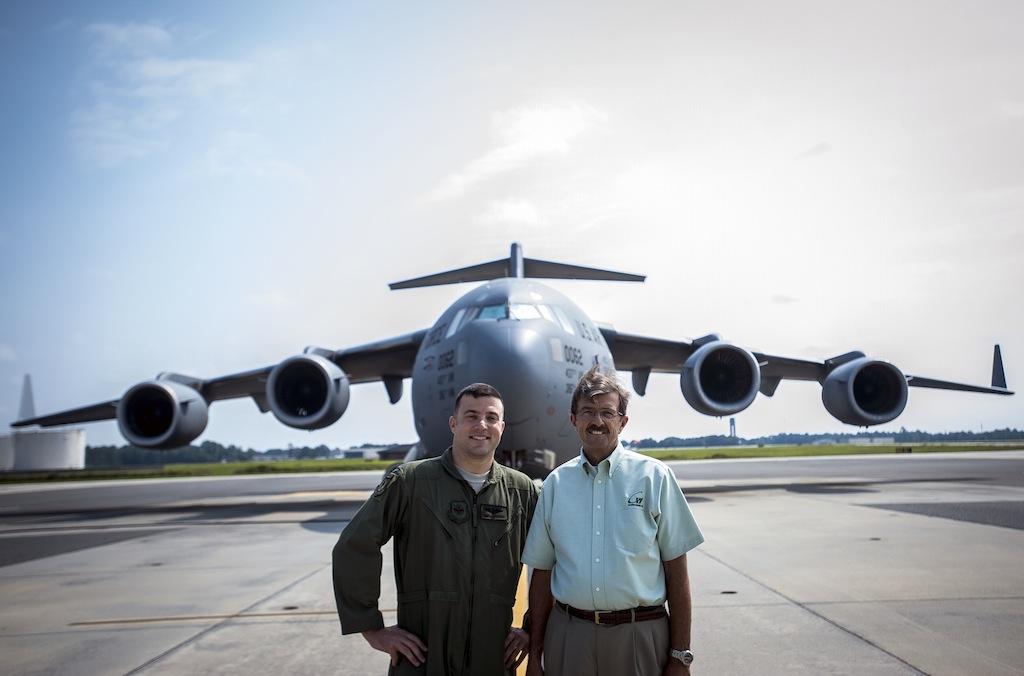 Any father would be proud to watch their son be a part of the arrival of the last Boeing C-17 Globemaster III to Joint Base Charleston. However, for retired U.S. Air Force Chief Master Sgt. Bob Morris, felt more than pride knowing his son, Tech. Sgt. Mike Morris, 437th Airlift Wing Operations Group standards and evaluations loadmaster, was in the aircraft, he also felt nostalgic.

Bob was an active duty loadmaster on the first C-17 that flew into the Charleston Air Force Base. And, more than 20 years after that historic flight, Bob stood among a crowd of onlookers as the Air Force’s final C-17 landed on the flightline of JB Charleston – Air Base, S.C. and completed the fleet.

For Mike, he was just finishing the job his dad started.

And, also unlike most of us, Mike lived out his boyhood dream.

As a young boy, Mike didn’t know the technical aspects of his dad’s job. All he knew was his dad got to see the world from a bird’s eye view. However, Bob was doing much more than looking at clouds in the sky. He was handpicked to be the chief of testing the new aircraft, as well as hand picking his team of loadmasters.

Bob was charged with the task of signing off on every aspect of the C-17 from the loadmaster’s perspective. Bob, and his team, laid the foundation for the safety and mission capabilities for loadmasters in the generations that followed.

“I’d ask myself ‘would you put your child in this aircraft?’ and if my answer wasn’t a confident yes, I wouldn’t sign off on it,” said Bob.

Bob hung up the flight suit in 1996, but didn’t walk away from the loadmaster career field. Since retiring from active duty until today, Bob has worked as a C-17 training systems legal administrator at JB Charleston – Air Base, and has taught and mentored young loadmasters for more than 17 years.

But nobody has learned from Bob’s mentorship more than his son, Mike.

“When I enlisted, there was only one career for me and that’s loadmaster,” said Mike, looking back on his career. “My dad set a high standard, but it’s just motivated me from day one to be better than the previous day.”

After the terrorist attacks on Sept. 11, 2001, Mike was one of the first Airmen to step up and request to leave on missions into Southeast Asia. In the years that followed, he continued to take on any mission, no matter what the challenge.

In the more than 12 years that followed the attacks, as Mike evolved as an Airman, the C-17 evolved as an aircraft. Today, the C-17 has been through so many updates and modifications; it’s barely recognizable on the inside to the first model.

However, the first C-17 that Bob brought in is still operational today and will continue the airlift mission along with the last one brought in more than twenty years later by Mike.

“I am very proud of the Airman that Mike has become,” said Bob. “He’s my hero.”