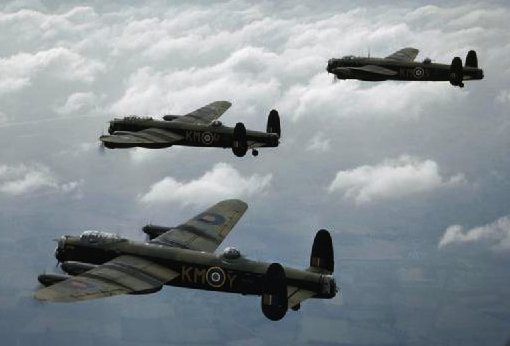 The night he was told that his brother had been shot down, Fred Panton ran off into a barn and hid. “I daredn’t go back in the house,” says Fred, who was 13 at the time. “I was sure it would hit my mother hard.”

His big brother, Christopher, was only 19, but had already been on dozens of raids over Germany when his bomber was attacked by night fighters and exploded in the sky near Nuremberg in March 1944. That was nearly 70 years ago. Now Fred and another brother, Harold, are building a remarkable tribute to the handsome, blond sibling they lost that spring: a fully-restored Avro Lancaster bomber that will soon fly again.

“It’s a memorial to my brother and to all the lads who flew in bomber squadrons during the war,” says Fred, standing with Harold in the shadow of this magnificent aircraft.

For the complete story by Cole Morton of The (London)Telegraph, click here.